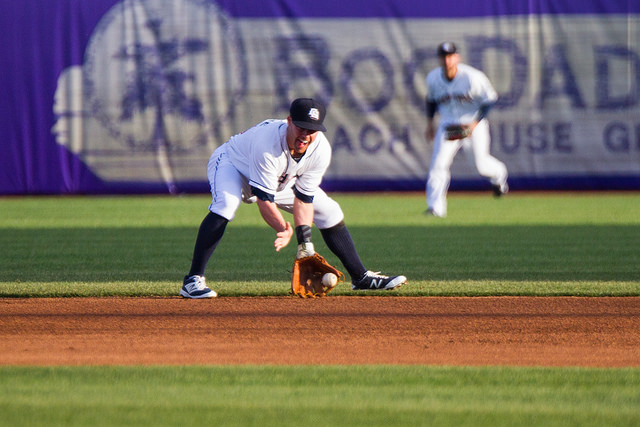 Before the Sky Sox could blink they found themselves down 7-0 to the Round Rock Express in the opening game of homestand. However, as we know, this team doesn’t quit and they began their comeback with a pair of runs in the third. Another two in the fourth. The fifth too…A run in the 6th made it 9-7…Another three runs in the 7th made it 10-9 Sox and they held their first lead of the game after trailing 7-0 after two frames. Although the comeback was great and deserves all of the praise, the lead was short-lived and the Express rolled through with the tying run in the 8th and the winning run on a squeeze play in the 9th resulting in the 11-10 final. Ike Davis was the hero for Round Rock as he went 3-for-5 with 2 doubles and 5 RBI.

Despite racking up 16 hits, only two knocks went for extra bases. Josmil Pinto and Will Middlebrooks each had a double in the defeat.

The Sox had four stolen bases in the game which tied the season-high mark set in the April 24 game at Omaha.

Keon Broxton fulfilled his role as  the table setter and went 3-for-6 with a run scored, stolen base and RBI. It was Broxton’s single to center in the 7th that gave the Sky Sox their (albeit brief) 10-9 lead.

Will Middlebrooks collected his first multiple-hit game of the season with a 2-for-5 showing at the plate. He had one of the two doubles, a run scored, and an RBI. He’s got three hits and four RBI in his last two tilts.

Josmil Pinto went 2-for-5 at the plate with a double, run scored and RBI…This is just an aside, but the catcher’s position between Pinto and Manny Pina has given the Sky Sox  34 hits in the 29 games combined they have played, pretty good production.

Eric Young Jr. and Orlando Arcia each had two-hit nights at the plate as well, Garin Cecchini and Andy Wilkins picked up a knock apiece and Michael Reed was the lone Sox without a hit, but he reached twice, scored two runs and drove in one.

Ariel Pena started the game for Colorado Springs, but could not record an out in the second and left with the bases loaded. His outing started strong as he struck out the first two hitters he faced, but Jared Hoying hit a solo homer and opened the floodgates. Pena’s final line: 1+ innings, 5 runs (all earned), 3 hits, 4 walks and 3 strikeouts. He tossed 54 pitches and just 22 for strikes.

Brent Suter made his first relief appearance of the season and it turned out to be more like a start for the native-ohioan. He went 4 1/3 innings and provided necessary relief for the pitching staff. He finished his outing allowing 4 runs on 7 hits, 2 walks and 1 strikeout.

Drew Gagnon was the shining spot for the staff as he came in with a runner at second and one out in the 6th and retired all five men he faced over his 1 2/3 inning outing.

Damien Magnifico pitched on back-to-back days for the first time in 2016 and was charged with the blown save and loss. He allowed an inherited runner in the 8th and the winning run in the 9th to cross the plate. He’s given up one run in each of his last three outings and four of his last five.

Play of the Game:

Will Middlebrooks not only collected a two-hit game, but delivered the play of the game. With a runner at first and one out, Jurickson Profar hit a bullet to the hot corner, which WMB fielded on a dive. From his knees he threw to Jake Elmore at second who quickly turned it over to first for the 5-4-3 inning-ending double play.