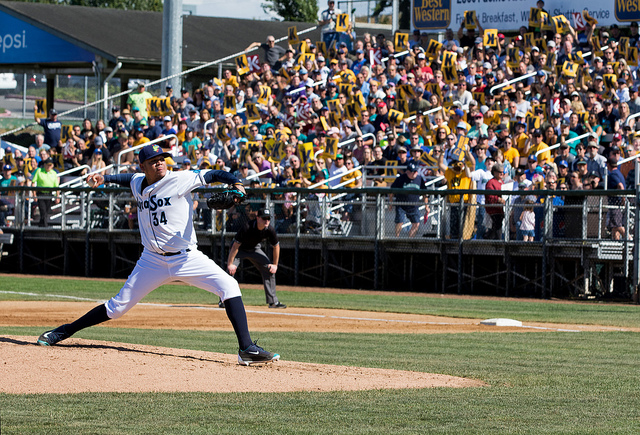 The King’s Court was rockin’ in Everett back in Hernandez’s first rehab start on Sunday. He will make his second career outing against the Sky Sox and second rehab appearance tonight in Tacoma. (Shari Sommerfeld/MiLB.com)

The Sky Sox mustered one run on four hits against the top-tiered Tacoma Rainiers in the return to action last night at Cheney Stadium. Orlando Arcia doubled to begin the fourth and scored on a sac fly, which tied the game at 1-1. The next half inning two Rainier solo homers against Hiram Burgos put the Mariners top affiliate in front for good at 3-1. Cody Martin went six innings and earned his eighth win, while Burgos dropped to 5-6 and the team back to .500 (44-44) with the loss.

Before we get into the nitty gritty about the second game of the four-game series, the Brewers and Sky Sox have announced the following transactions –

Scahill rejoins the Sky Sox for the first time since 2014 when he was property of the Rockies. He made 93 appearances with the Sox from 2012 to 2014.

This evening, Colorado Springs and Tacoma face off in the second game of four at Cheney Stadium in what is the first series of a two series, eight game road trip. The Sky Sox fell for the first time in the second half with a 3-1 loss at the hands of the Rainiers and dropped back to an even .500 at 44-44.  Heading into tonight’s tilt, the Sky Sox will send righty Wily Peralta to the hill for the sixth time in his Sox career and the Rainiers will counter with 2010 Cy-Young Award Winner Felix Hernandez who joins the squad on a rehab assignment. Peralta is  0-2 with a 9.17 ERA in 5 starts with the Sky Sox and Hernandez was 4-4 with a 2.86 ERA in 10 games with the Mariners this season before going on the disabled list. This will be the second time these two pitchers have started against one another, the first being August 11, 2013 at Safeco field. More on that game below… The Sky Sox are 0-1 against Tacoma this season 169-168 all time against them and 73-103 on the road.

Sky Sox Pitcher: RHP Wily Peralta takes his sixth trip to the mound in a Sky Sox uniform and his second away from Security Service Field. The righty is 0-2 with a 9.17 ERA after his five starts, in which he allowed 20 runs (18 earned) on 29 hits, 3 homers, 11 walks, and struck out 15 in 17 2/3 innings of work. The righty pitched into the fourth inning against Iowa in his last start, but has yet to complete four frames more than once this season. He went 3 2/3 and allowed 3 runs on 5 hits, 2 homers, 3 walks, and struck out 4 in his debut with the Sox on June 16 against the Cubbies. Peralta was the opening day starter for the Brewers and made 13 starts for the big-league squad before being optioned to Colorado Springs on June 12. He compiled a 4-7 record with a 6.68 ERA and allowed 52 runs (49 earned) on 97 hits, 12 homers, 27 walks and 42 strikeouts in 66 innings. The righty hasn’t been in the minors full-time since 2012 when he made 28 starts with Triple-A Nashville. In 103 MLB games, Peralta is 39-44 with a 4.33 ERA and in 146 MiLB games he is 33-37 with a 4.09 ERA. He was originally signed by the Brewers as an international free agent in 2005 out of the Dominican Republic.

Last 10 Games with the Sky Sox:

Rainiers Pitcher: Right-hander and bona fide big leaguer Felix Hernandez gets the call for the Rainiers tonight in Tacoma for the first time since 2005. Following 10 starts with the Mariners the 2010 American League Cy Young Award Winner went on the disabled list with a strained right calf, retroactive to May 28, 2016. He’s made one rehab appearance since with the Everett Aqua Sox. In the 10 MLB starts this season, Hernandez went 4-4 with a 2.86 ERA allowing 26 runs (20 earned) on 51 hits in 63 innings. He rejoins Tacoma and the Pacific League for the first time since July 30, 2005. It was in the PCL that he was named both a Mid and Post-Season All-Star, Rookie of the Year, and Pitcher of the Year with the Rainiers compiling a 9-4 record and 2.25 ERA in 19 games (14 starts) which covered 88 innings. He faced the Sky Sox one time that season and tamed Security Service Field to the tune of 1 run over 5 innings and brought home the win, the second of his AAA career. Over parts of 12 MLB seasons, Hernandez is 147-105 with a 3.11 ERA in 344 games. He’s thrown 25 complete games and 11 complete game shutouts in the Majors including the first Perfect Game in Mariners history on August 15, 2012 against the Rays. In his minor-league career he is 30-10 with a 2.64 ERA in 59 games (49 starts). He was signed by the Mariners as a non-drafted free agent on July 4, 2002.

Last Time Out: 7/10/16 vs. Spokane (w/Everett) – Hernandez began his rehab assignment with a short outing with the Aqua Sox. He allowed 3 runs on 6 hits, 2 walks, and 6 strikeouts to the Spokane Indians in 3 2/3 innings of work. He did not factor into the decision.

This game is a rematch of the August 11, 2013 game at Safeco Field between the Mariners and Brewers. Seattle took home the 2-0 win over Milwaukee. Peralta pitched a complete game in defeat allowing the two runs on four hits while striking out four. Hernandez improved to 12-5 with the win. He threw 8-shutout frames and struck out nine Brewers.

Dan Karcher (@SkySoxKarch) continues his 27th season behind the mic for Sky Sox games, he will have the call of tonight’s game from Cheney Stadium at 8:05 p.m. I will get Sky Sox Warmup fired up and running at 7:30 MDT on XTRA Sports 1300.