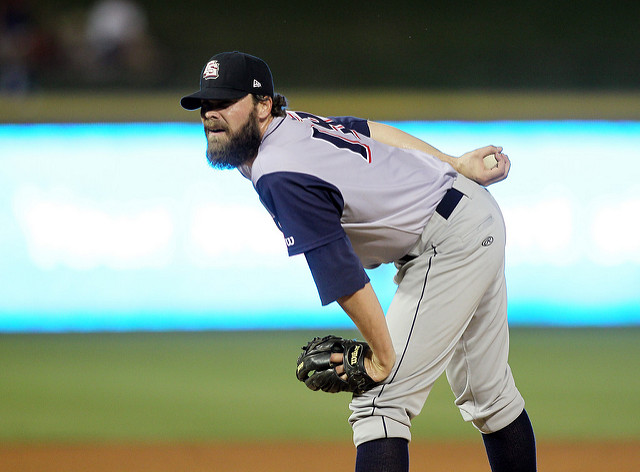 Tim Dillard made his 2016 debut in the 7-1 loss to the Sounds. Dillard begins his 10th stint in AAA. The righty along with Hiram Burgos have pitched for both Nashville (when they were the Brewers top affiliate) and Colorado Springs. (Jim Redman/MiLB)

The Sky Sox ran into a hot arm, an offense waiting to explode, and fell 7-1 to the Sounds in the series opener in the Music City. The Sounds got a great performance from LHP Sean Manaea in his Triple-A debut. The southpaw pitched into the sixth allowing the one run on four hits, he struck out six without walking any Sox. Nashville smacked two homers in the game after not going deep in its first four games.

The top three in the order (EY, Arcia, Reed) all got a base knock. Jake Elmore came off the bench and picked up the other hit and lone RBI on the night for the Sox.

OF Michael Reed has hit safely in the five games he’s played in this season and extended his PCL on-base streak to 17 games dating back to 8/27/15. Over that span, Reed is 19-for-57 (.333). His streak is tied for the second-longest active streak (along with Iowa’s Javier Baez) behind Salt Lake’s Kyle Kubitza who has reached in 45-straight PCL games dating back to 7/19/15.

SS Orlando Arcia has reached safely in all five games to begin his Triple-A career. He’s picked up a hit in four of the five games.

Pitching Notes: Hiram Burgos made his first start of the 2016 campaign and began his fifth AAA stint in his eighth professional year. He couldn’t make it out of the fourth inning and took the loss to the Sounds.

Austin Ross came out of the pen and tossed two scoreless, K’ing four Sounds in the process.

Play of the Game: The Sounds loaded the bases with nobody out against Tim Dillard in the fifth inning, BUT did not score. Joey Wendle stepped in and hit a fly ball to left which Michael Reed caught and fired home to get Max Muncy for the inning-ending double play.

Thanks for reading! See you on the radio,