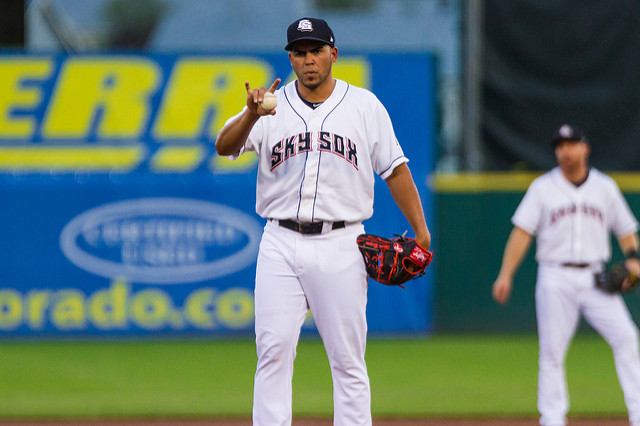 Hiram Burgos looks to build upon a great outing against the Redbirds his last time out tonight in Omaha. The veteran righty will be squared up against the veteran lefty John Lannon of Omaha. (Photo: Bobby Stevens/MiLB)

Following the excitement of last night’s 8-7 walk-off win, the Sox hit the road and open up a 9-day, 8-game, intra-divisional road trip which takes them to Omaha for four games and then to Iowa for the final four. The Sox will be back at Security Service Field for the first of an 8-game homestand on May 2.

The Omaha Storm Chasers and Sky Sox spilt the 16-game season series 8-8 last year and rekindle their rivalry this weekend at Werner Park. Through the first 16 games of the season, the ‘Chasers are 10-6 and hold a 1.5 game divisional lead over the OKC Dodgers and a 2.0 game advantage over the Sox. This series allows Colorado Springs to gain some ground on the top team in the division if they can scrape up a couple of wins.

Sky Sox Pitcher: RHP Hiram Burgos gets his third start for the Sky Sox on the young season tonight in Omaha. Burgos, the younger of the two starters, is 1-1 with a 5.63 ERA in two starts; he’s allowed 5 runs on 10 hits, 2 walks, and 7 strikeouts in 8 innings pitched. His last outing was much better than his first as he earned the victory and held the Memphis to 1 run on 4 hits, no walks, and 5 strikeouts in 5 innings of work.

Storm Chasers Pitcher: LHP John Lannan takes his fourth turn in the rotation for Omaha this evening. Through three starts the veteran righty is 1-1 with a 4.02 ERA allowing 7 runs on 17 hits, 7 walks, and 7 strikeouts in 15 2/3 innings. Lannan has faced the New Orleans Zephyrs on two occasions and the Round Rock Express on another. The best outing of his 2016 campaign came on April 13 against the Express where earned the win and logged 5 2/3 innings allowing 2 runs on 6 hits, 1 walk, and 4 strikeouts.

Dan Karcher (@SkySoxKarch) continues his 27th season behind the mic for Sky Sox games, he’ll have the call of the first pitch from Werner Park tonight at 6:05 p.m. I’ll be firing up Sky Sox Warmup at at 5:30 MDT on XTRA Sports 1300.

See you on the radio,