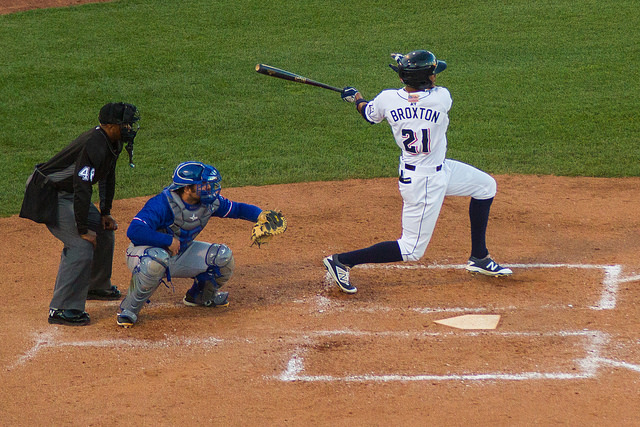 In his last 9 games, Keon Broxton is batting .357 (15-f0r-42) with 7 home runs and 3 walks. He’s leading off and playing centerfield tonight for the Sky Sox. (Bobby Stevens/MiLB.com)

The Sky Sox shooed out the Round Rock Express with a 6-4 win in the finale of a four-game series yesterday and get set to welcome in the Oklahoma City Dodgers to Security Service Field. The Dodgers enter action today with the league’s best pitching staff as they have compiled a 3.22 ERA over the first month of the season. Their pitching staff is highlighted by RHP Jose De Leon, who is slated to pitch Sunday, and 19-year old LHP Julio Urias, who is scheduled to pitch Monday. The Sky Sox look to improve upon their 4-6 home record with a couple of wins in this series.

Tonight, the Sky Sox look to Ariel Pena in a spot-start situation as the original probable, Tyler Cravy got the call to start for the Brewers in Cincinnati with Wily Peralta going on the Paternity List. Journeyman RHP Jeremy Kehrt goes for the Dodgers in the first of four tonight at 6:35 p.m. from Security Service Field.

Today’s game is Air Force Appreciation Night presented by USAA/BAE Systems with postgame fireworks. Here are all the great promotions lined up for the next few days at Security Service Field!

Sky Sox Pitcher: RHP Ariel Pena looks for a bounce-back outing on short rest after facing just 10 batters on Monday in his start against Round Rock. On the season the season, the righty has no record with a 9.45 ERA. In 6 2/3 innings with the Sky Sox he’s allowed 7 runs on 9 hits, 6 walks and 6 strikeouts. The best start for Pena came his first trip to the mound for Colorado Springs on 4/20 against the Sounds at home. He went a season-high three innings and gave up a hit while striking out two. He has not made it through the third inning in his two most-recent outings. Pena began the season with the Brewers and made one appearance in which he gave up back-to-back-to-back home runs to Denard Span, Joe Panik, and Buster Posey of the Giants on Opening Day.

Last Time Out: 5/2/16 vs. Round Rock – Pena faced 10 Express hitters and left with the bases loaded and nobody out in the second. He gave up a pair of runs in the first and three more in the second. He didn’t factor into the decision; his final line read 1+ innings, 3 hits, 5 runs (all earned), 4 walks, and 3 strikeouts. He threw 54 pitches, but only 22 strikes.

Dodgers Pitcher: RHP Jeremy Kehrt is scheduled to make his 5th start for the OKC Dodgers and 197th minor-league appearance of the season. The righty was drafted by the Boston Red Sox in the 47th round of the 2008 draft and spent 2008-mid-2014 with the Red Sox system, advancing as high as Triple-A, until he was traded to the Dodgers for cash considerations in August 2014. He spent all of 2015 with Double-A Tulsa where he went 7-8 with a 3.46 ERA in 22 starts. Kehrt is still searching for his firs appearance in MLB. In 9 MiLB seasons, the righty is 38-44 with a 4.15 ERA in 196 appearances (105 starts).

Last Time Out: 4/26/16 at Iowa – Kehrt earned the win his last time out against the Iowa Cubs with six-strong innings. He limited the Cubs to 2 runs on 6 hits, 3 walks and a season-high 8 strikeouts. He threw 98 pitches, 63 of which went for strikes. Both of his wins have come on the road.

Dan Karcher (@SkySoxKarch) continues his 27th season behind the mic for Sky Sox games, he and I will both have the call of the first pitch from Security Service Field at 6:35 p.m. Sky Sox Warmup fires up at 6:00 MDT on XTRA Sports 1300.

The Brewers fell 9-5 in the opener of their weekend series against the Reds…Tyler Cravy got the call yesterday and will make the spot start for the Crew tonight at Great American Ballpark…Biloxi has hit a season-high 3-game losing streak with its 81 loss at Pensacola last night…Jorge Ortega took the loss allowing four runs in the first inning, while Jacob Nottingham had two of the three Shuckers’ hits…Brevard County was doubled-up 4-2 by the Flying Tigers…Kodi Medieros couldn’t make it out of the fourth inning for the Sea Cows…Wisconsin has almost climbed back to .500, but fell 5-3 to the Whitecaps last night dropping its record to 13-15…Jake Gatewood had two hits in the losing effort for the T-Rats.

Thanks for reading – See you on the Radio,