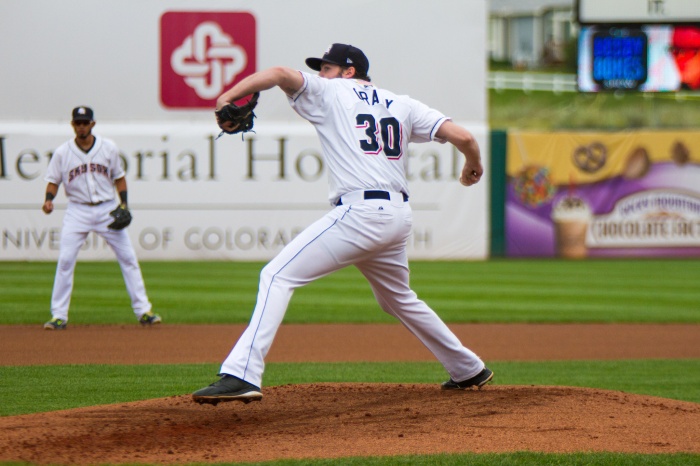 Tyler Cravy gets the start in the season-series finale against the 51s today at Security Service Field. Cravy tossed three-scoreless innings his last trip to the mound on Tuesday against Salt Lake, but you’ll never find record of that because it was in a game that was ultimately cancelled due to rain. (Bobby Stevens/MiLB.com)

The Sky Sox held a 3-0 lead heading to the seventh inning, but Las Vegas and its second-ranked offense came roaring back with three two-out runs to tie it and tallied the go-ahead run in the top of the ninth en route to the 4-3 win Saturday night.

The turning point in the game was a towering fly ball that Travis Taijeron hit with two outs in the seventh. Andy Wilkins appeared to have a beat on it in right field, but it drifted on him back towards the infield and landed closer to second baseman Yadiel Rivera than anyone. The knock went down as an RBI double for Taijeron and cut the 51s deficit to 3-2. Another run crossed home in the seventh and Niuman Romero dropped an RBI single into left in the ninth to give the 51s the lead for good.

You can read more about last night’s game below in the Quick Hits portion of the blog.

The Sky Sox and Las Vegas 51s get set to wrap up their four-game series with the finale this afternoon. The Mets top affiliate in the Pacific Coast League is 23-18 on the season and currently sits a half-game out of first place in the Pacific South division. This is the second inter-conference matchup for the Sox after they dismissed the Bees 2-0 on the beginning half of the homestand. The Sox and 51s split a four-game series last year and the all-time series lies 189-171 in favor of the Sky Sox. This will be the only series against Las Vegas in 2016.

Sky Sox Pitcher: RHP Tyler Cravy gets the nod for what should be his fifth appearance and fourth start with the Sky Sox, however it will go down as only his fourth appearance and third start thanks to Mother Nature. The righty got the start in game one of the scheduled doubleheader on Tuesday against the Bees and went three scoreless innings before the rains came and wiped away baseball for the rest of the night. He had four strikeouts over the three innings. Through his first three official appearances with the Sky Sox, Cravy is 0-0 with a 3.38 ERA allowing 5 runs (4 earned) on 8 hits, 3 walks, and 12 strikeouts in 10 2/3 innings. His last outing was a dandy as he went five innings and allowed one hit (albeit a two-run homer) to the New Orleans Zephyrs on May 12. Cravy has been to the bigs twice this season where he has made six appearances (one start) for the Brewers. He’s 0-1 with a 6.52 ERA allowing 7 runs on 14 hits, 2 walks, and 9 strikeouts in 9 2/3 innings. In his career the righty from Martinez, California is 35-29 with a 3.72 ERA in the minors and 0-9 with a 5.85 ERA in 20 MLB games.

Last Time Out: 5/17/16 vs. Salt Lake – Cravy went three innings against the Bees on Tuesday in a rain-shortened and ultimately cancelled affair. The righty allowed a double and walk in the first, but finished his outing by retiring the final seven he faced in order. He struck out the side in the second and picked up four strikeouts in the brief start. Prior to that Cravy went five and allowed two runs on a homer, walked a pair and struck out six.

Las Vegas 51s Pitcher: LHP Duane Below will make his seventh trip to the mound for the Mets top affiliate today at Security Service Field. The lefty is 2-3 with a 4.21 ERA through his first six starts allowing 18 runs (17 earned) on 41 hits, 9 walks, and 31 strikeouts in 36 1/3 innings. Opponents in the PCL are hitting .291 against the southpaw who hails from Britton, Michigan and attended Lake Michigan College. Below was originally selected by the Detroit Tigers in the 19th round of the 2006 draft and signed as a free agent by the Mets prior to the 2015 and 2016 seasons. Below has 43 big-league games under his belt with the Tigers and Marlins and is 2-4 with a 4.27 ERA.In 184 minor league appearances (165 starts) the lefty is 62-52 with a 3.52 ERA.

Last Time Out: 5/16/2016 at Oklahoma City – Below climbed the hill in Oklahoma City and spun a beauty. He went seven-shutout innings and allowed just four baserunners on three hits and a walk while striking out five Dodgers. He threw a season-high 98 pitches and was around the zone all night with 67 crossing the zone. He earned the win in a game the 51s won 12-4.

Dan Karcher (@SkySoxKarch) continues his 27th season behind the mic for Sky Sox games, he  and I will have the call of the first pitch from Security Service Field at 1:35 p.m. Sky Sox Warmup gets all fired up at 1:00 MDT on XTRA Sports 1300.

After a 19-hit attack on Friday night, the Sky Sox picked up 9 hits last night. Two hitters earned themselves a multi-hit affair and three extra-base hits were knocked around Security Service Field; a double, triple, and homer.

Shane Peterson began the game with a bang and put the Sky Sox in a great position to win with a two-run homer against Seth Lugo two batters into the game. The blast was Peterson’s first of the year and put the Sox up 2-0 in the first inning. He went on to have a 2-for-4 night at the plate.

Manny Pina collected two hits with a 2-for-4 night at the plate which included an RBI triple. The three-bagger was the third of the season for the catcher, but get this, he came into the 2016 season with three CAREER triples. He’s doubled his career total and it’s only May…Awesome.

Yadiel Rivera scored on Peterson’s homer in the first after he singled and extended his hitting streak to five games with the Sky Sox.

Orlando Arcia hit a double and extended his hitting streak to 12 games, which ties the team-high watermark set by Keon Broxton earlier this month.

Michael Reed went 1-for-3 and notched his first hit in three games since returning from the disabled list.

Andy Wilkins saw his seven-game hitting streak come to an end with an 0-for-4 showing at the plate.

Hiram Burgos was great and gave the Sky Sox a real chance to win with five-scoreless innings of work. The righty allowed 5 hits and 2 walks and struck out 5 51s in the process. He threw 95 pitches, 56 for strikes.

David Goforth took home a tough-luck blown save and allowed three runs in the seventh inning. His final line read 1 2/3 innings 5 hits, 3 runs, and 1 strikeout, but it was the pop up to very shallow right-center that fell for an RBI double that set the tone for the rest of the game.

Jacob Barnes notched a scoreless 1/3 of an inning and Michael Kirkman made his 2016 debut with the Sky Sox and got through 2/3 scoreless.

Damien Magnifico took home his fourth loss of the season and allowed 1 run on 2 hits and a walk in 1 1/3 innings.

Unfortunately the true play of the game was the pop fly that fell in shallow right-center field, which turned into an RBI double for Travis Taijeron and made the game 3-2. Andy Wilkins seemingly ran a country mile in an attempt to get to the fly ball that landed within 10 feet of the second baseman Yadiel Rivera who had drifted onto the outfield grass. The miscommunication cost the Sky Sox a run and put the 51s in a prime position to steal the third game of the series.