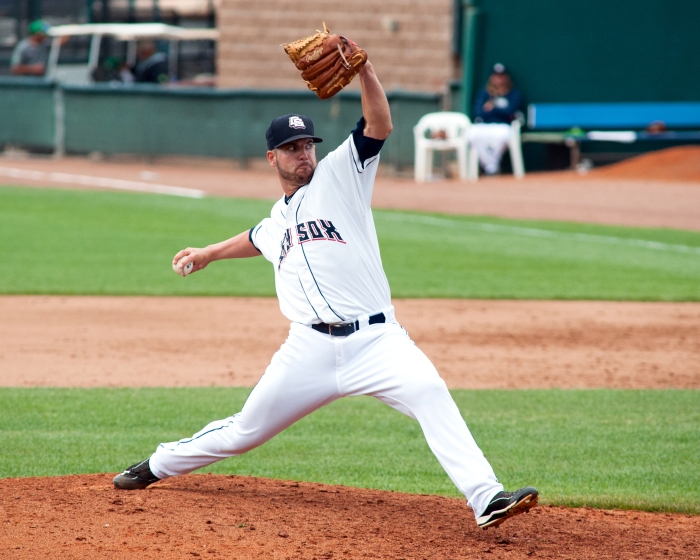 The challenge of pitching in altitude in Colorado Springs can be difficult for many pitchers.

Sky Sox closer Damien Magnifico is no different, but he has taken the challenge and done his best to succeed despite the perceived obstacles.

“When I come out here and pitch, I don’t think about it,” Magnifico said. “You see things happen here that you don’t see in any other ballpark. But you have to go out and pitch your game and what ever happens, happens.”

For the first few months of the season, Magnifico has been one of the Sky Sox best relievers and one of the best closers in the Pacific Coast League.

As of July 3, Magnifico ranks fifth in the PCL with 12 saves and second in games finished with 27. Magnifico is also tied for second on the Sky Sox in wins with four. The strong numbers earned Magnifico a spot on the PCL All-Star team, and he is thrilled about it.

“It feels good, it’s an honor to be selected,” he said. “It should be a fun experience.”

Magnifico’s best pitch is arguably his fastball, which is consistently in the high-90s, but he is working on some off-speed stuff as well.

“I throw a sinker for the most part,” he said. “I also throw a slider and changeup.”

Magnifico’s strong pitching is one of the reasons the Sky Sox are having a strong season, as they currently sit just three games out of first place in the PCL American Northern Division. The Sky Sox tendency to earn dramatic come from behind wins has been exciting to watch, but has made Magnifico’s job a little tougher.

“It makes it a little difficult for my job when I’m trying to figure out if I’m going to pitch,” he said. “Boom we score five in the eighth and I have to pitch the ninth.”

Despite the extra difficulty, Maginifico is loving the challenge.

“Overall, this team doesn’t give up. That’s how we are,” he said.

In his first season at the Triple-A level, Magnifico has shown he is ready compete with the best.

“There are more veteran guys here. It’s tougher to read hitters,” he said. “You ahve to be able to execute your pitches.”

Magnifico has been executing his pitches this season, and he will look to continue that trend as the Sky Sox battle the first place OKC Dodgers in a three game series this week.