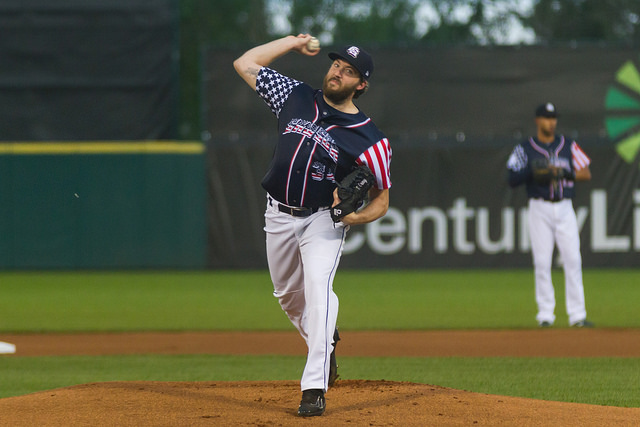 Tyler Cravy was rolling his last time to the mound, but Mother Nature intervened and ended his night two pitches into the third. He seeks his second win on the road this season. (Bobby Stevens/MiLB.com)

The Sky Sox came out like a dud firework on July 4th and fell to the Dodgers 7-2 in the series opener at Chickasaw Bricktown Ballpark Monday evening. Jorge Lopez was attacked for four runs over the first two innings and six in total during his four inning start. Offensively, Colorado Springs had to work hard at manufacturing two runs, one scoring in the 5th on a double play, the other on an RBI ground out in the 7th. Logan Bawcom made his fourth career start and went four scoreless before being ejected in the fifth for throwing at Eric Young, Jr. Manager Bill Haselman was also tossed in the tilt. That small dustup could make for an interesting final two games of the series…

Tonight, the Sky Sox and Oklahoma City get ready to square off in the second game of the three-game series and road trip at Chickasaw Bricktown Ballpark. The Sky Sox are back to one game above .500 (41-40) and are now five games in back of the Dodgers for first place within the division. In hopes of getting back to their winning ways, the Sky Sox will send righty Tyler Cravy to the hill against fellow right-hander Brock Stewart. Cravy is 2-2 with a 6.03 ERA in 9 games, 8 starts with the Sox, while Stewart is 3-0 with a 2.89 ERA in 3 games started with Oklahoma City. The Sky Sox are 2-3 against OKC this season 65-88 all time against them and 25-51 on the road.

Sky Sox Pitcher: RHP Tyler Cravy takes a trip to the hill for the 10th time with the Sky Sox this season and 9th in the starting role tonight against Oklahoma City. The righty is 2-2 with a 6.03 ERA across his first nine outings with Colorado Springs. In 34 1/3 innings he’s allowed 25 runs (23 earned) on 30 hits, 5 homers, 18 walks, and 37 strikeouts. Opponents are hitting .236 against the California native. He last pitched against New Orleans in the opener of the four-game series, but only logged two innings because of rain. The righty is 1-0 with a  3.15 ERA in 5 games, (4 starts) away from Security Service Field and will make his first start against the Dodgers tonight. He has made two stints with the Brewers in 2016 as well, over which he is 0-1 with a 6.52 ERA in 9 2/3 innings of work. Overall in his career, Cravy has a 37-31 record with 3 saves and a 3.87 ERA in the minors and a 0-9 record with a 5.85 ERA in 20 big-league games. He was drafted by Milwaukee in the 17th round of the 2009 draft out of Napa Valley College.

Last Time Out: 6/30/16 vs. Memphis – Cravy was on a roll to begin the ballgame in teh series opener against New Orleans and retired the first six men he face before rain halted play with a 2-0 count to Carlos Corporan in the top of the third. Cravy would not resume when the game did and ended up going 2-plus innings and allowing a walk while striking out four. He threw 25 pitches, 17 for strikes.

Last 10 games with the Sky Sox:

Dodgers Pitcher: Right-hander Brock Stewart returns to OKC from the Los Angeles Dodgers where he made his big-league debut against the Brewers on June 29. He rejoins the OKC Dodgers where he is 3-0 with a 2.89 ERA in his first three Triple-A starts. He has given up 6 runs on 15 hits, 3 homers, 2 walks, and struck out 27. Opponents in the PCL are hitting .205 against the 24 year old. He has earned the win in each of his first three starts and has pitched into the sixth in each one as well. His last PCL victory came at home against Round Rock on June 24. He went six innings and struck out 10. The righty excelled quickly to the show after being selected by Los Angeles in the 6th round of the 2014 draft out of Illinois State. He hadn’t pitched above Double-A entering the season, but found himself in the bigs pitching against the Sky Sox parent club his last trip to the mound. In two plus seasons, the righty is 15-11 with three saves and a 3.13 ERA in 56 minor-league games (34 starts) and 0-1 with a 9.00 ERA in his lone MLB appearance.

Last Time Out: 6/29/2016 at Milwaukee – Stewart got the spot start for the Dodgers against the Brewers and was tagged for 5 runs on 8 hits, 1 homer, 2 walks, and struck out 7 over five innings of work at Miller Park. Kirk Nieuwenhuis took him deep in the second inning for a three-run jack. He threw 95 pitches, 63 for strikes in a game the Dodgers lost 7-0.

Dan Karcher (@SkySoxKarch) continues his 27th season behind the mic for Sky Sox games, he will have the call of tonight’s game from Chickasaw Bricktown Ballpark at 6:05 p.m. I will get Sky Sox Warmup off and running at 5:30 MDT on XTRA Sports 1300.