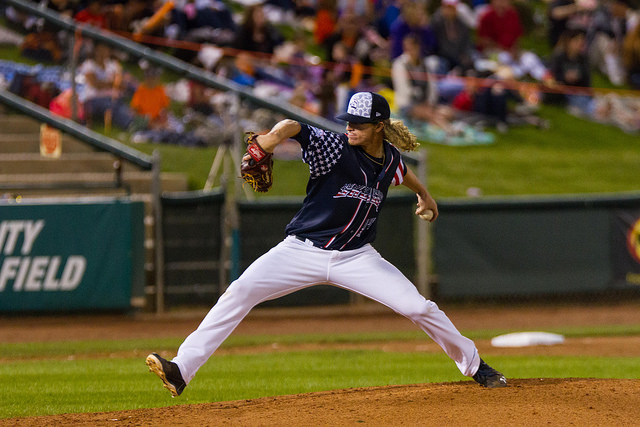 Josh Hader climbs the hill for the Sox tonight in Reno looking to get the Sox back to their winning ways. (Bobby Stevens/MiLB.com)

The Sky Sox couldn’t get out of Tacoma fast enough after the Rainiers completed the sweep with a 7-3 win in the final Sunday afternoon at Cheney Stadium. The Sky Sox tallied three runs on seven hits, brining their second-half total to 7 runs on 20 hits through the first four games. Jorge Lopez took the hill and was roughed up to the tune of seven runs on nine hits, including three homers allowed. For the Rainiers, Patrick Kivlehan had a monster night with two home runs and a defensive web gem. D.J. Peterson connected for a home run in the fifth, then Lopez hit Dario Pizzano and was ejected along with manager Rick Sweet. The benches cleared in the 8th when Emilio Pagan threw inside to Josmil Pinto, but no real fracas occurred. Joe Wieland took home the win for the Rainiers.

Before we dive into the first of four between Reno and Colorado Springs, the Brewers and Sky Sox announced the following roster moves –

Tonight, Colorado Springs has traveled to Reno, Nevada and will open up a four-game series against the Aces at Greater Nevada Field. This is the final series of the road trip before the Sky Sox return home to host the Round Rock Express int eh first of four on Friday.  The Sky Sox fell for the fourth time in the second half with a 7-3 loss at the hands of Joe Wieland and the Rainiers and dropped back to three games below .500 at 44-47.  Heading into the opener against Reno, the Sky Sox will send lefty Josh Hader to the hill for the sixth time on the road and the Aces will counter with right-hander Braden Shipley. Hader is 0-2 with a 6.38 ERA in 5 starts with Colorado Springs while Shipley is 7-5 with a 3.85 ERA in 18 games with the Diamondbacks top affiliate. The Sky Sox went 1-3 against Reno last season, 39-47 all-time against them and 17-25 on the road.

Sky Sox Pitcher: LHP Josh Hader is set to make his sixth Triple-A start, his third away from Security Service Field, and his 17th overall between Double-A Biloxi and the Sky Sox. Hader has dropped two of his first five Triple-A starts which have come against Omaha, Memphis (2x), Round Rock, and New Orleans. Last time out the lefty went four innings and Zephyrs while allowing 7 runs and striking out 5. Hader is 0-2 with a 6.38 ERA allowing 17 runs on 27 hits, 14 walks, and 31 strikeouts in Triple-A. He allowed 2 runs on 1 hit, 4 walks, and a season-high 9 strikeouts against Memphis in his Triple-A debut on June 12 and tossed five scoreless against the Express on June 27. In 16 starts combined, Hader is 2-3 with a 2.56 ERA and has allowed 25 runs (23 earned) on 65 hits, 33 walks, and 104 strikeouts in 81 innings of work. He has not pitched for the Sox since July 3rd, but did make an appearance in the MLB Futures Game and recorded a strikeout of Josh Naylor of the Marlins system with a 96-MPH fastball. The 22-year old is in his 5th professional season after originally being selected by the Orioles in the 19th round of the 2012 draft out of Old Mill High School in Millersville, Maryland. The Astros sent RHP Bud Norris to the Orioles in exchange for Hader in July 2013 and the Brewers acquired him from the ‘Stros in the Jul 30, 2015 deal that sent Carlos Gomez and Mike Fiers to Houston for Hader, Adrian Houser, Brett Phillips, and Domingo Santana. What a haul that trade garnered the BrewCrew. The lefty is 23-19 with five saves and a 2.88 ERA in 106 career outings, 74 of which have been starts in four-plus professional seasons.

Aces Pitcher: Right-Hander Braden Shipley gets the call for Reno in the opener of the four-game series at Greater Nevada Field. In nine starts at home, Shipley is 3-1 with a 3.70 ERA, and in 18 starts overall he is 7-5 with a 3.85 ERA allowing 52 runs (48 earned) on 124 hits, 6 homers, 19 walks, and 70 strikeouts in a league-high 112 1/3 innings pitched. Opponents are hitting .282 against the righty who hails from Medford, Orgeon. Shipley was selected by Arizona in the 1st round of the 2013 draft out of the University of Nevada at Reno, so he is pitching in familiar territory with the Aces. In three-plus professional seasons the righty is 23-27 with a 3.83 ERA in 80 career appearances (79 starts).

Dan Karcher (@SkySoxKarch) continues his 27th season behind the mic for Sky Sox games, he will have the call of tonight’s game from Greater Nevada Field at 8:05 p.m. I will get Sky Sox Warmup fired up and running at 7:30 MDT on XTRA Sports 1300.