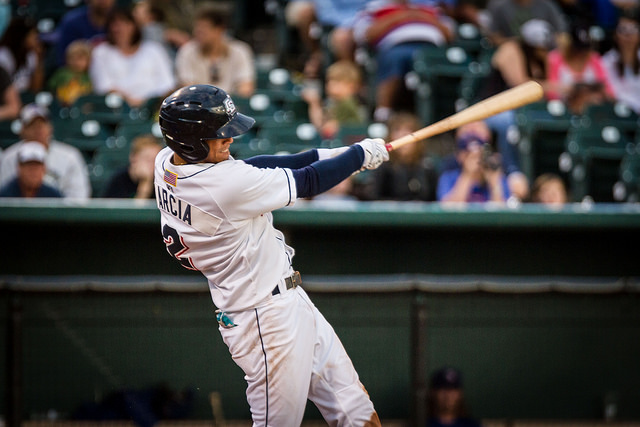 Orlando Arcia crushed his eighth homer of the season, a three run shot in the third inning of Saturday’s game against Oklahoma City. (Bobby Stevens/MiLB.com)

Burgos allowed four runs on two hits, an error and two wild pitches in the second inning and that set the tone for the rest of the contest. Orlando Arcia hit a 3-run homer in the third that brought the game to 4-3, but that was as close as the Sox would get in the opener. A run in the fourth, two more errors in the seventh led to another pair, and Corey Brown capped the Dodgers’ attack off with a pinch-hit solo homer in the eighth. Jose De Leon was on the other side of the bump for the Dodgers and he was as advertised. The righty allowed three runs, all on the Arcia homer in the third, across his seven innings.

Before we get into this afternoon’s game, the Brewers and Sky Sox have announced the following transaction:

This afternoon, the Sky Sox continue their series against the first-place Oklahoma City Dodgers for the second game of a four-game series and eight-game homestand at Security Service Field. The Sky Sox continue to play well at the friendly confines of SSF where they are 31-20 in 51 games. They enter play four games under .500 at 50-54 and still in second place 11 games in back of the Dodgers. In hopes of gettiing back to its winning ways and gaining ground on OKC, Colorado Springs will send right-hander Wily Peralta to the hill, while the Dodgers will counter with fellow righty Logan Bawcom. Peralta is coming off of three straight strong starts and is 1-3 with a 6.34 ERA and Bawco has been outstanding in his own right going 3-3 with a 1.96 ERA in 24 appearances with the Dodgers. In 2016 the Sky Sox are 2-6 against the Dodgers, they hold an all-time record of 65-91 against them and are 40-38 between them at Security Service Field.

Sky Sox Pitcher: RHP Wily Peralta takes his ninth trip to the mound in a Sky Sox uniform and his fifth at Security Service Field. The righty is 1-3 with a 6.34 ERA after his eight starts, in which he allowed 25 runs (23 earned) on 44 hits, 4 homers, 13 walks, and struck out 32 in 32 2/3 innings of work. The righty pitched earned his first with the Sox his last trip to the hill against Nashville. Opponents are hitting .326 against the righty here in the PCL. He went 4 1/3 and allowed 2 runs on 5 hits, 1 homer, 1 walk, and struck out 2 against Felix Hernandez and the Rainiers on 7/15. That game was a rematch of the August 11, 2013 game between the Brewers and Mariners at Safeco Field. Peralta was the opening day starter for the Brewers and made 13 starts for the big-league squad before being optioned to Colorado Springs on June 12. He compiled a 4-7 record with a 6.68 ERA and allowed 52 runs (49 earned) on 97 hits, 12 homers, 27 walks and 42 strikeouts in 66 innings. The righty hasn’t been in the minors full-time since 2012 when he made 28 starts with Triple-A Nashville. In 103 MLB games, Peralta is 39-44 with a 4.33 ERA and in 150 MiLB games he is 34-38 with a 4.06 ERA. He was originally signed by the Brewers as an international free agent in 2005 out of the Dominican Republic.

Last Time Out: 7/26/16 at Nashville – Peralta pitched on the road for the fourth time with the Sox, turned in his third-straight solid performance and earned his first with the Sky Sox. He muted the Sounds to the tune of one run on five hits in five innings. He didn’t walk a batter and struck out four, throwing 73 pitches, 44 for strikes in a game the Sox won 5-2.

Dodgers Pitcher: Right-hander Logan Bawcom will make just his eighth career start tonight against the Sky Sox in the second game of the four-game series. Bawcom enters play 3-3 with a save and a minuscule 1.96 ERA in 24 PCL games (6 starts) and is 4-3 with two saves and a 1.97 ERA in 29 games (6 starts) between Triple-A OKC and Double-A Tulsa. In 64 PCL innings, Bawcom has allowed 16 runs (14 earned) on 45 hits, 20 walks, and 50 strikeouts. He has faced Colorado Springs three this season and has compiled seven innings of one-run ball against the Sox. He started against Colorado Springs on July 4th and turned in four innings allowing one run on 2 hits. Bawcom was originally selected by the Dodgers in the 17th round of the 2010 draft and has played for the Dodgers and Mariners organizations. In 286 career appearances, seven of which have been starts, the righty is 25-23 with 87 saves and a 3.27 ERA.

Last Time Out: 7/26/16 at New Orleans – Bawcom turned in a great performance his last trip to the mound against the Redbirds. The righty held Memphis scoreless over six innings and scattered five hits, walked one, and struck out three. He threw 87 pitches, 58 for strikes in a game OKC won 3-2.

Dan Karcher (@SkySoxKarch) continues his 27th season behind the mic for Sky Sox games, he and I will have the call of today’s game from Security Service Field at 2:05 p.m. Sky Sox Warmup will liftoff at 1:30 MDT on XTRA Sports 1300.

The Sky Sox scored their four runs on five hits and just had two knocks past the third inning. They did not record a multi-hit game.

Orlando Arcia provided the pop with a three-run homer in the third inning, which brought the Sky Sox back to within one at 4-3, but that is as close as they would get. The blast was the 8th of his season and the second against De Leon. It drives his RBI total up to 51.

Garin Cecchini picked up an RBI double over the head of the centerfielder Micah Johnson in the ninth inning to cap off the scoring.

Michael Reed was the lone Sky Sox to reach more than once as he walked three times.

Eric Young, Jr. led off, singled, and scored a run.

Yadiel Rivera had the other knock and a run scored.

Hiram Burgos ran into big trouble in the second which opened the floodgates for the Dodgers. He walked two in the inning, had two wild pitches, and a throwing error which led  to the four-run inning. When all was said and done, the righty gave the Sox five innings and allowed 5 runs (4 earned) on 4 hits, 4 walks, and 4 strikeouts. He threw 88 pitches, 52 for strikes and dropped to 5-8 with the loss.

Sam Freeman recorded another multiple-inning outing and gave up two runs (one earned) on three hits in two innings while striking out a pair.

Rob Scahill gave up a pinch-hit homer to Corey Brown in his one inning of work.

Drew Gagnon struck out one Dodgers in his lone inning of work.