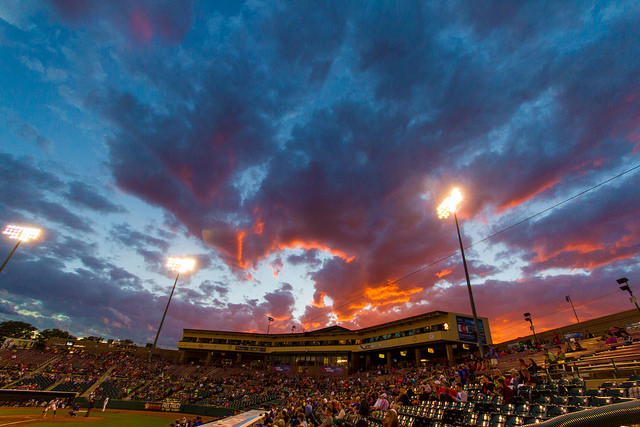 Colorado Springs wrapped up a very successful road trip with a 4-1 win over the Storm Chasers in Nebraska, Wednesday night. Wei-Chung Wang made his return to the Sky Sox in grand fashion and limited Omaha to an unearned run on 6 hits, no walks, and 5 strikeouts over five innings. Five pitchers came out of the pen to lock down the final four innings. It all culminated with Damien Magnifico picking up his third save of the series and 17th of his season. Offensively it was Lewis Brinson tying the game in the sixth with a sacrifice fly, Brandon Macias giving the Sox the lead with a two-run double in the seventh, and Michael Reed capping off the attack with a solo homer in the ninth. The Sox have now hit one single homer in 13 straight games.

Tonight, the Sky Sox welcome the Albuquerque Isotopes into Security Service Field for the first time in two years, and the first time as a Rockies Affiliate. This will be the lone series between the two teams with the unbalanced schedule in the Pacific Coast League. The Sky Sox enter play in search of their third straight victory and come into tonight’s tilt with a home record of 35-23. They are back to just one game under .500 at 57-58 and sit in second place 7 games in back of the Dodgers. In hopes of continuing its winning ways and gaining more ground on or keeping pace with OKC, Colorado Springs will send righty Aaron Wilkerson to the bump, while Albuquerque will counter with lefty-hander Harrison Musgrave. Wilkerson is 1-4 with a 6.00 ERA in six starts with the Sky Sox and 1-1 with a 4.02 ERA at home. Musgrave is 6-6 with a 4.79 ERA through his first 14 starts in Triple-A. In 2016 the Sky Sox and ‘Topes have yet to square off, but history shows that the Sox went 2-2 against them last season, are 148-152 all-time against them and 77-67 versus them between the lines of Security Service Field.

Sky Sox Pitcher: RHP Aaron Wilkerson is set to make the seventh start of his tenure within the Brewers organization tonight in Colorado Springs. The righty was acquired by the Brewers in early July in the deal that sent Aaron Hill to the Red Sox. He is a combined 7-7 with a 3.09 ERA in 23 appearances between Double-A Portland, Triple-A Pawtucket, and Colorado Springs. With the Sox he is 1-4 with a 6.00 ERA allowing 21 runs (20 earned) on 38 hits over 30 innings in six starts. He took the loss his last time out here at home against the Sounds, allowing 5 earned runs in 5 2/3 innings. With the PawSox he went 4-2 with a 2.44 ERA in 9 games (8 starts) allowing 18 runs (13 earned) on 41 hits, 11 walks, and 54 strikeouts over 48 innings. He went undrafted out of Cumberland (TN) University and played in the Independent leagues in 2013-14 before the Red Sox purchased his contract. In 60 professional games the righty is 23-11 with a 2.85 ERA, between the Red Sox and Brewers.

Last Time Out: 8/6/16 vs. Nashville – The righty Wilkerson climbed the hill in the series finale against the Sounds and lasted 5 2/3 innings. He gave up 5 runs on 12 hits, didn’t walk anyone and struck out a pair of Sounds. He threw 86 pitches, 62 for strikes in a rain-shortened affair the Sox lost 5-2.

Isotopes Pitcher: Lefty Harrison Musgrave will toe the slab for Albuquerque tonight in the Springs. He enters play 11-7 with a 3.80 ERA on the season in 20 starts between Double-A Hartford and the Isotopes. In 14 games with the ‘Topes the southpaw is 6-6 with a 4.79 ERA allowing 45 runs (44 earned) on 91 hits, 14 homers, 31 walks, 2 hit batters and 52 strikeouts in 82 2/3 innings pitched. He is 3-2 with a 4.54 ERA on the road and PCL opponents are hitting .283 against him. Musgrave is the 26th ranked Rockies prospect according to MLB pipeline. He was selected by the Rockies in the 8th round of the 2014 draft out of the University of West Virginia and has made 60 professional appearances, 58 from the starting role. He has compiled a 26-16 record and a 3.68 ERA  in his three seasons.

Last Time Out: 8/5/16 vs. Sacramento – Musgrave took his 6th loss of the season when he pitched against the River Cats at home on the 5th. He went the first five innings on the back end of a doubleheader and allowed 3 runs on 7 hits, walked a pair and struck out 1 Cat. He threw 63 pitches, 37 for strikes in a game the ‘Topes lost 3-2.

Dan Karcher (@SkySoxKarch) continues his 27th season behind the mic for Sky Sox games, he and I will have the call of tonight’s game from Security Service Field at 7:05 p.m. Sky Sox Warmup  will get off the ground and running at 6:30 MDT on XTRA Sports 1300.