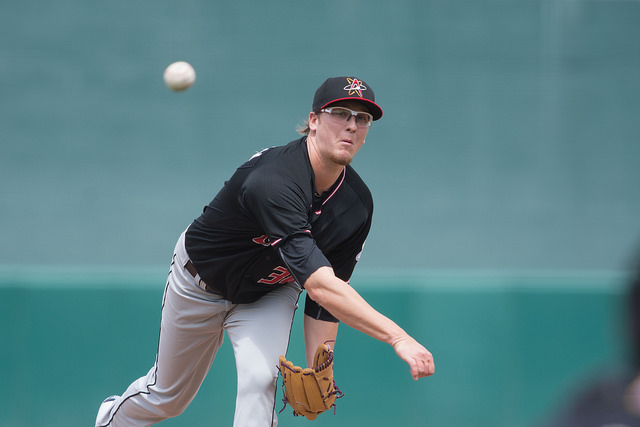 Jeff Hoffman proved to be yet another arm for the Isotopes that was up to the challenge of silencing Sky Sox hitters. Albuquerque took home the 3-1 win and extended its streak to 8 games. (David Calvert/MiLB.com)

Different day, same story for the Sky Sox as they fell 3-1 to the Albuquerque Isotopes Sunday afternoon at Security Service Field. The game had two of the best pitchers in MiLB going against one another in Sox lefty Josh Hader and ‘Topes righty Jeff Hoffman and, boy, they did not disappoint. Hader retired the first nine men he faced before allowing two runs on three hits in the fourth inning. He would give up a pair of extra-base hits that led to a run in the fifth inning as well. On the other side of the rubber it was Hoffman who bested Hader with 5-scoreless frames. He allowed an infield single to Nate Orf in the first, but that was all the hits he gave up. The righty did walk a batter, but finished his outing retiring the final 11 men he faced and struck out nine Sox en route to his sixth win of the year. Colorado Springs trailed 3-0 heading to the ninth inning, but made some noise and it looked as if another miraculous comeback was coming. Yadiel Rivera and Parker Berberet began the inning with back-to-back singles and with one out Orf picked up an RBI single and got the Sox on the board, but that was all she wrote as EY was called out on strikes (on a very questionable call) and Garrett Cooper grounded out to short to end the game.

The loss marked the third in a row for the Sox and the win was the eighth in a row to Albuquerque. Later Sunday OKC thumped El Paso 13-2 and that put the Sox 10 games out of first place.

The Sky Sox were limited to 1 run on 4 hits, marking the second time this week they have been held down to those numbers.

Nate Orf had the lone multi-hit game and picked up an RBI with a 2-for-4 performance at the plate from the second spot in the lineup. He continues to creep back up towards .300 and sits at .293 with 32 RBI.

Yadiel Rivera singled and scored the run for Colorado Springs and Parker Berberet singled in the ninth inning for his first hit in Triple-A. Congrats Parker!

Lewis Brinson grounded out to third base to end the first and did not return to the game.

Josh Hader dropped to 0-5 in Triple-A with the loss, but again the Sox didn’t give him much room to work with, scoring just one run. The lefty picked up a quality start with six solid innings, in which he gave up 3 runs on 6 hits, walked 1 and hit 1 and struck out 6 ‘Topes. He threw 90 pitches, 64 for strikes.

Ben Rowen made his home debut with two scoreless innings. He allowed a hit, walked one, and struck out two.

Damien Magnifico pitched a scoreless ninth, walking one, allowing a hit, and striking out a pair.

The play of the game came defensively for the Sox in the second inning. Rafael Ynoa hit a sharp ground ball to third, Garin Cecchini backhanded it, fired to first off of his back leg and got Ynoa by a couple of steps to end the frame. It was a spectacular play to wrap up the second inning.