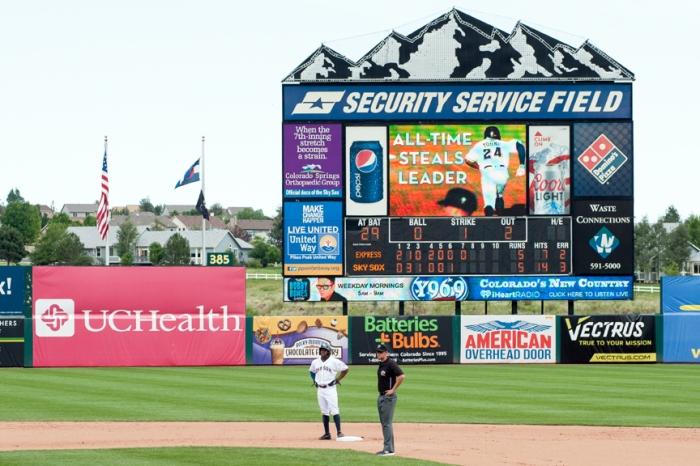 From a young age, Eric Young Jr. knew he wanted to be a professional athlete.

While his father, Eric Young Sr., was playing in the Major Leagues, the younger Young was soaking in the environment of professional sports, and he was dreaming of a potential future for himself.

“I knew being in that atmosphere, being around the guys, and playing at a high level was a dream of mine,” Young Jr. said.

Growing up, Young Jr. realized that if he wanted to make it to the big leagues and succeed, he would have to play a game focused around speed, similar to his father. 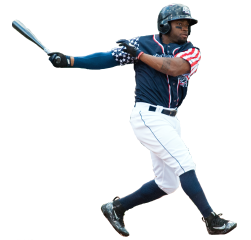 “I pretty much figured that one out at an early age,” he said. “I knew speed was going to be a big part of my game.”

After being drafted by the Rockies in 2003, Young Jr. found himself using his speed to get closer to the Major Leagues. In two of his first four professional seasons, he was the league leader in stolen bases before getting promoted to Colorado Springs in 2009.

In his first season with the Sky Sox in 2009, Young Jr. led the Pacific Coast League with 58 steals, and he would make his Major League debut later that season in a moment he’ll never forget.

The dream took Young Jr. to the New York Mets in 2013, a year in which he took home the National League stolen bases crown with 46, including a pair on the final day of the season to secure the title.

“I know how to pick my moments when to go, when to steal a base when I need to,” he said. 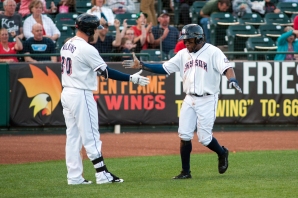 Young Jr. is a leader on the current Sky Sox roster. (Paat Kelly)

Now, Young Jr., 31, finds himself back in his old stomping ground, the state of Colorado, trying to make it back up to the Majors. Young Jr. is one of the leaders of the current Sky Sox squad, a young team that features a good mix of veterans and up-and-coming young talent.

Young Jr. has taken on the role of a leader, and it is one he knows is an important one on a team of young players.

“Me being a veteran on this particular team, when it’s time to buckle down and focus, I can get everyone’s attention to do that,” he said. “If people seem like they’re too hard on themselves and they need to relax and have some fun, I can interject that as well.” 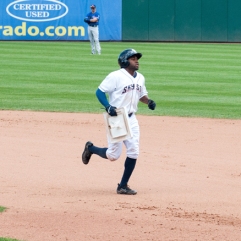 A teammate with a similar style of play to Young Jr. is outfielder Kyle Wren, whose game is also based around speed and running the bases. Having a veteran like Young Jr. on the roster is something Wren isn’t taking for granted.

“Anytime you have a guy with his type of experience in the big leagues, you try your best to talk to him, learn from him, watch him play the game, and try and apply it to your game as well,” Wren said. “I think just more or less just picking his brain, knowing that we play the same kind of game has helped me.”

On July 25, the speedy Young Jr. took his place atop the Sky Sox record books. With three steals in a matinee game against the Round Rock Express, Young Jr. had 105 career steals with the Sky Sox, passing Trenidad Hubbard’s previous record of 104. As of August 24, Young Jr. now has 23 steals on the season and 108 in his Sky Sox career.

VIDEO: @EYJr steals 2nd base without a throw to become the Sky Sox All-Time stolen base leader with 105! pic.twitter.com/L9O5d3d1yz

Hubbard was a teammate of Young Sr. in the Majors, and Hubbard spent time with Young Jr. when he was an instructor in the Rockies organization. Now, Young Jr. could break the record set by his one-time instructor. 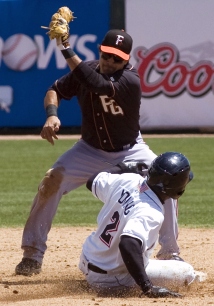 Young Jr. during his first stint with the Sky Sox in 2011. (Paat Kelly)

“Anytime you can pass a record, it’s a great accomplishment no matter what level it’s at,” Young Jr. said before breaking the record. “God willing I’ll be able to break this record and then someday someone will be good enough to pass that.”

The state of Colorado has been a big part of Young Jr.’s career, and he is thankful for all the support he has gotten.

In addition to stolen bases, Young Jr. ranks toward the top in a number of categories. As of August 24, Young Jr. has 326 career hits with the Sky Sox, ranking 11th all-time. Young Jr. is also third in Sky Sox history with 247 runs scored and second all-time with 22 triples.

“This is my stomping ground, the state of Colorado. It’s a place near and dear to my heart, at the Triple-A and the big league level,” he said. “I love playing my heart out for everyone that comes here, especially in the Springs.”

Now, Young Jr. will continue to climb the record book and play his heart out as the Sky Sox look to finish the season on a high note.

This story originally appeared in the third edition of The Inside Pitch, the Sky Sox game day magazine, and has been edited.