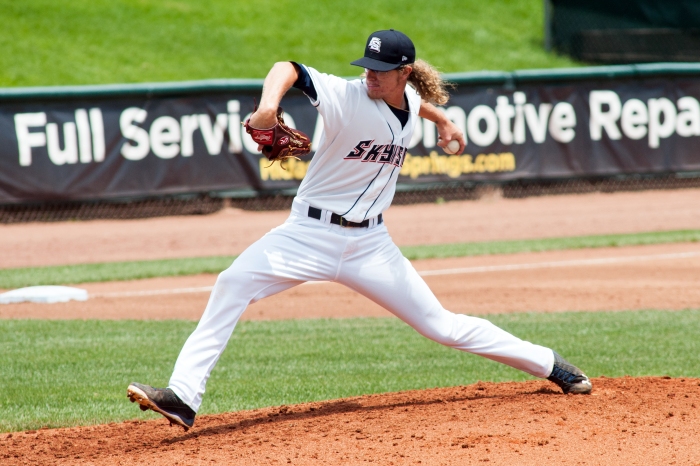 Josh Hader has been strong all season. (Paat Kelly)

Josh Hader has found his groove.

After his promotion to Colorado Springs from Double-A Biloxi on June 11, the Sky Sox lefty has been one of the best pitchers in the league, despite his 1-6 record.

As of August 31, Hader’s 156 strikeouts this season ranks third in all of Minor League Baseball, and he is showing no signs of slowing down.

“Starting in Biloxi, I had a good season, a good beginning,” Hader said. “When I got called up here, it was a big learning experience pitching in the environment against better hitters.”

After a couple tough losses started his time in Colorado Springs, Hader finally broke through to earn his first Triple-A win on August 21 in Round Rock. In that game, Hader pitched six scoreless innings, striking out a career-high 12 while walking one and allowing just two hits as the Sky Sox topped the Express 6-0.

“It was nice, being able to go to a place where it’s humid and you have more break on your pitches,” Hader said. “The fastball and being able to use my secondary pitches early in at-bats was keeping hitters off-balance.”

While the wins haven’t been coming for Hader in Colorado Springs, he is still pleased with his pitching and how the season has gone. On a scale of 1-10, he said he would rank his season around a 10.

One pitcher Hader said he enjoyed watching is Hall of Famer Randy Johnson. The Big Unit was known for his fearsome fastball and intimidating slider, and that is something Hader was sure to take note of.

“I liked to watch Randy Johnson, but I didn’t really take anything form him and add it to my mechanics,” Hader said. “How he throws his slider, that’s one of the main things I would like to have.”

Off the field, Hader is usually as relaxed as can be, and he credits that atmosphere to his teammates.

“I’m having a lot of fun. It’s just a real good atmosphere to be here,” he said. “It helps you relax . The environment is great and you look forward to coming to the ballpark every day.”

Hader is scheduled to make his final start with the Sky Sox this season on Friday night in Iowa.