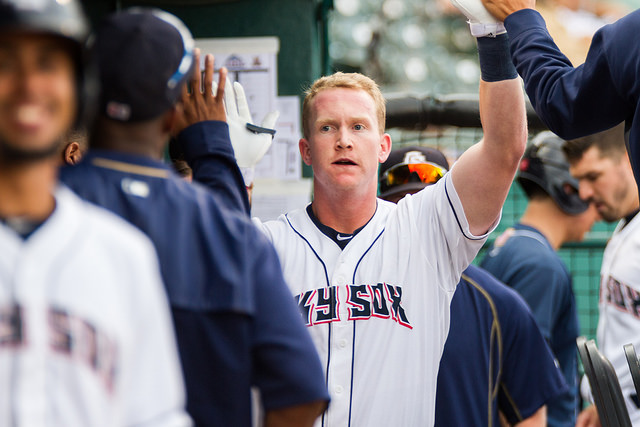 The Sky Sox reached and will finish with 41 home wins in 2016 thanks to the 4-0 shutout victory over the New Orleans Zephyrs Thursday night in the home finale. Drew Gagnon made another start and was outstanding, going 5 2/3 scoreless innings and allowing two hits, while Sam Freeman, Michael Kirkman, and Tim Dillard wrapped it up on the bump. Offensively it was back to back doubles by Pinto and Wilkins that put Colorado Springs up 2-0 in the second and Garrett Cooper delivered another prodigious two-run homer in the eighth inning to cap off the scoring. With the win the Sky Sox swept away the Zephyrs and posted their 41st home win in 68 games played. That is the most home wins in a season since 2005 when they also posted 41.

This evening, the Sky Sox have traveled to Iowa and are set to do battle in the first game of the final four-game road series of the 2016 campaign. REPEAT THIS IS THE FINAL SERIES OF THE 2016 SEASON. This is the fourth and final series these two teams will play here this season. The Sky Sox enter play looking to continue their winning ways and get above the .500 mark. They come into the tilt with a road record 26-40. They are back to  .500 at 67-67 and sit in second place, 8.5 games in back of the Dodgers with their playoff hopes gone with the wind. In hopes of continuing the final week on the upslope, Colorado Springs will send lefty Josh Hader to the mound against fellow lefty Joe Thatcher in what will be a full bullpen game. Hader is 1-6 with a 5.18 ERA in 13 games with Colorado Springs and Thatcher is 0-0 with a 7.94 ERA in 7 games with the Cubs. Both teams have been eliminated from postseason play. The Sox are 6-5 against the Cubs’ top affiliate and have taken four of the last five games of the season series, and have compiled an 87-103 all-time record against them and are 36-55 at Principal Park.

Sky Sox Pitcher: Lefty Josh Hader is set to make his 14th Triple-A start, his eighth away from Security Service Field, and his 25th overall between Double-A Biloxi and the Sky Sox. Hader has dropped six of his first 13 Triple-A starts which have come against Omaha (2x), Memphis (2x), Round Rock (3x), New Orleans, Reno, Nashville (2x), Albuquerque and Oklahoma City. Two trips ago the lefty was outstanding and earned his first Triple-A win with six shutout innings, over which he struck out a career-high 12 Express. He is 1-6 with a 5.18 ERA allowing 40 runs (38 earned) on 60 hits, 32 walks, and 83 strikeouts in Triple-A. PCL opponents are hitting .245 against him.  He allowed 2 runs on 1 hit, 4 walks, and 9 strikeouts against Memphis in his Triple-A debut on June 12 and tossed five scoreless against the Express on June 27. In 24 starts combined, Hader is 3-7 with a 3.22 ERA and has allowed 47 runs (44 earned) on 98 hits, 51 walks, and 156 strikeouts in 123 innings of work. He made an appearance in the MLB Futures Game and recorded a strikeout of Josh Naylor of the Marlins system with a 96-MPH fastball. The 22-year old is in his 5thprofessional season after originally being selected by the Orioles in the 19thround of the 2012 draft out of Old Mill High School in Millersville, Maryland. The Astros sent RHP Bud Norris to the Orioles in exchange for Hader in July 2013 and the Brewers acquired him from the ‘Stros in the Jul 30, 2015 deal that sent Carlos Gomez and Mike Fiers to Houston for Hader, Adrian Houser, Brett Phillips, and Domingo Santana. What a haul that trade garnered the BrewCrew. The lefty is 24-23 with five saves and a 3.02 ERA in 114 career outings, 81 of which have been starts in four-plus professional seasons.

Dan Karcher (@SkySoxKarch) continues his 27th season behind the mic for Sky Sox games, he will have the call of tonight’s game from Principal Park at 6:08 p.m. I will get Sky Sox Warmup off the ground and running at 6:00 MDT on XTRA Sports 1300.