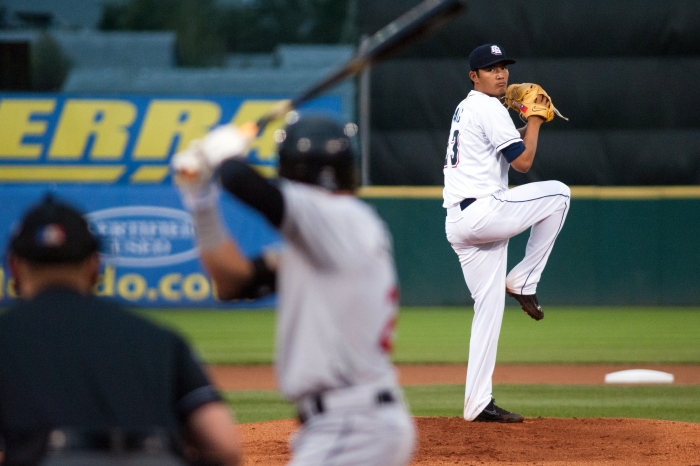 Wang to the hill in his series finale tonight in Iowa. (Paat Kelly)

It had all the makings of a patented Sky Sox comeback as Colorado Springs was trailing 3-0 heading to the ninth. Four straight singles and it was 3-1, a sac fly later it was 3-2 with the tying run at third base and one out, but that is where the rally died. Garrett Cooper advanced from second to third on the play, but was deemed to have left too early and was called out when the Cubs appealed. Josmil Pinto struck out to end the game and the Sox fell 3-2 in the opener. Garin Cecchini had the RBI single in the ninth, Andrew Susac delivered the sac fly and Cooper had two hits in the loss. Josh Hader gave up two runs on a Juan Perez homer in the second, took the loss and lasted three innings.

This evening, the Sky Sox and Cubs are ready to do battle in the second game of the final four-game road series of the 2016 campaign. REPEAT THIS IS THE FINAL SERIES OF THE 2016 SEASON. This is also the fourth and final series these two teams will play here this season. The Sky Sox enter play looking to return to their winning ways and get back to the .500 mark. They come into the tilt with a road record 26-41. They are back to one game under .500 at 67-68 and sit in second place, 9.5 games in back of the Dodgers with their playoff hopes gone with the wind. In hopes of continuing the final week on the upslope, Colorado Springs will send lefty Wei-Chung Wang to the mound against fellow right-hander Josh Collmenter of the Cubs. Wang is 1-2 with a 3.80 ERA in four starts with the Sox and Collmenter is 0-0 with a 2.45 ERA in three games with Iowa. Both teams have been eliminated from postseason play. The Sox are 6-6 against the Cubs’ top affiliate and have taken four of the last six games of the season series, and have compiled an 87-104 all-time record against them and are 36-56 at Principal Park.

Sky Sox Pitcher: Lefty Wei-Chung Wang is ready to make the sixth Triple-A start of his career and fifth of the season tonight against Oklahoma City. In four starts with Colorado Springs, the southpaw has a 1-2 record and a 3.80 ERA thanks to 21 1/3 innings against Omaha, El Paso, Round Rock, and Oklahoma City in which he’s allowed 11 runs (9 earned) on 25 hits, and 19 strikeouts. He is coming off a great start against the Dodgers, in which he went 7 innings and allowed one run on 5 hits and struck out 5. Opponents in the PCL are hitting .291 against Wang. In 19 starts with Biloxi the southpaw went 6-5 with a 3.52 ERA and allowed 45 runs (42 earned) on 102 hits, 7 homes, 1 hit batter, 33 walks, and 91 strikeouts in 107 1/3 innings. Opponents were hitting .258 against the Taiwan native. He made one appearance with the Sky Sox last year and did nothing but toss six scoreless innings against the Zephyrs on September 6, 2015 at Security Service Field. He scattered four hits, didn’t walk anyone and struck out five. Wang was signed by the Pirates as a free agent in 2011 and selected by the Brewers in the Rule 5 draft in December 2013. In four professional seasons, Wang has gone 20-18 with a 3.36 ERA in 68 appearances (66 starts) in the Minor Leagues, and is 0-0 with a 10.90 ERA in 14 MLB appearances with the Brewers.

Last time out – 8/28/16 at Dodgers – Wang Was outstanding as he went seven innings against the first-place Dodgers. He held OKC to a run on five hits and struck out five. The only downside was that he was up against Jose De Leon who threw 7 2/3 scoreless and struck out 13, thus he was dealt the loss.

Last time out – 8/29/16 at Nashville – The righty went five innings and allowed two runs on three hits, two walks and four strikeouts to the Nashville Sounds. He did not pick up a decision and threw 84 pitches, 51 of which went for strikes in a game the Cubs lost 3-2.

Dan Karcher (@SkySoxKarch) continues his 27th season behind the mic for Sky Sox games, he will have the call of tonight’s game from Principal Park at 6:08 p.m. I will get Sky Sox Warmup off the ground and running at 5:30 MDT on XTRA Sports 1300.