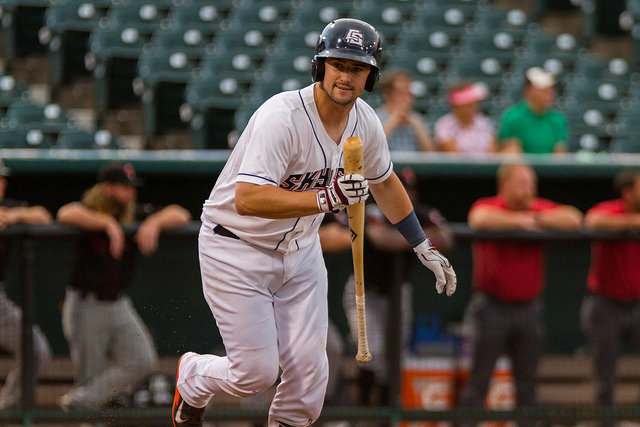 Andrew Susac  tallied two hits in the season finale with the Sky Sox. He is expected to be called up to the Brewers today. (Bobby Stevens/MiLB.com)

Unfortunately for Colorado Spring their offensive road woes plagued them over the last seven games away from Security Service Field, including the 12-3 loss at the hands of the Iowa Cubs Monday afternoon in the season finale. The Sky Sox held a 1-0 lead thanks to a Ramon Flores homer in the third inning and took a 3-1 lead with two runs in the fifth, but that is as close as they would get to a win in the season finale as the Cubs plated 11 unanswered runs en route to the 12-3 win. They used a four-run fifth, a two-run sixth, and a five-run eighth to put the Sky Sox away. Hiram Burgos took the loss allowing five runs on nine hits across five innings and Jordan Pries brought home the win with a quality start that saw him go six innings and allow three runs.

The loss brings the season to a close and the Sky Sox finish in second place with a 67-71 record, 12.5 games behind the first-place OKC Dodgers. Oddly enough, the Iowa Cubs finished with 67 wins as well, but due to all of the cancellations the Sky Sox finished ahead of them in the standings because they ended up with 5 fewer losses.

The Sky Sox picked up another three runs on seven hits, bringing their grand total to 7 runs on 24 hits in the four games. Not the best way to end the season, but some things are just out of your control.

Ramon Flores went 2-for-3 with a homer run and two RBI. It marked the first homer for the outfielder in a Sky Sox uniform.

Andrew Susac had the other multi-hit game for the Sox and went 2-for-4 with a double, RBI and run scored.

Garrett Cooper went 1-for-3 with a single, walk, and run scored.

Lewis Brinson finished his first stint with the Sox 1-for-4 with a single.

Hiram Burgos chipped in with a single, his second hit of the season and his second in as many starts.

Hiram Burgos came in winning five straight and we were all hoping he would finish with a six-pack of wins, but that just wasn’t the case. He went the requisite five innings, but gave up a four spot of runs in that final frame, leading to his 10th loss of the season. He finished the five allowing 5 runs on 9 hits, he walked a pair and struck out 5. He threw 84 pitches, 56 of which went for strikes.

Brooks Hall was the second of three pitchers used by the Sox and allowed 2 runs on 1 hit, and 1 walk in two innings of work.

Stephen Peterson took the brunt of the Cubs late-inning attack and allowed 5 runs on 6 hits in his one inning of work.

Ramon Flores picked up a solo homer in the third inning and it looked as though the Sox were off to their 68th win, but that was not the case. The homer is below –

Thank you for reading all season long! Hope you enjoyed following the Sky Sox all season long. Have a great offseason and we’ll see you on the radio in April 2017!!!