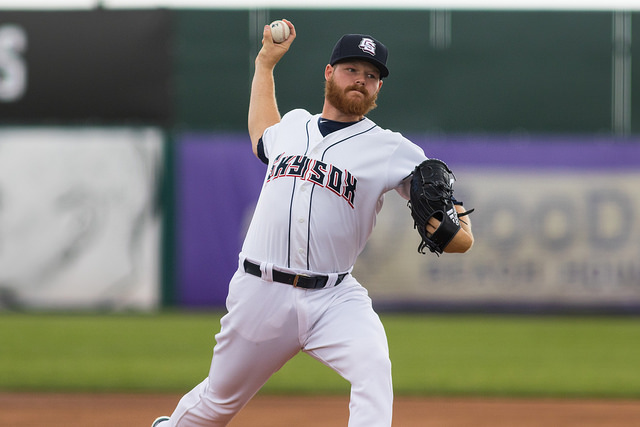 Brandon Woodruff made a splash in his debut and tossed 6 1/3 strong innings allowing an unearned run on five hits while striking out five. (Bobby Stevens/MiLB.com)

Holy moly. What an opening weekend so far for the boys of summer from Colorado Springs! Three wins in three games for just the 3rd time in the franchise’s 30-year history! Just the third time, and first since 2009!!! The first instance was in 2004. How is that possible?! It’s those statistics that make baseball such a wonderful game, you literally never know what you are going to see when you get to the yard. What may be even crazier is the fact that no Sox team has ever started 4-0, but because of the 11-2 drubbing of the Storm Chasers on Saturday, the Sox have a chance to make history on Sunday.

The tilt was billed as “The Duel of the Day” by MLBPipeline.com and featured two of the liveliest arms in all of the minors with righty Brandon Woodruff for the Sox and fellow right-hander Josh Staumont of the Chasers. It was the Triple-A debut for both men, and it was a tale of two Triple-A debuts, to be sure.

The Sky Sox wasted no time and jumped out to a 1-0 lead in the first thanks to a solo blast by Eric Sogard. He worked the count full and CRUSHED a 94 MPH fastball through the wind and way over the wall in right. Two more runs came around in the second inning on a walk and two knocks and that would be all Colorado Springs would need, but the bats were just heating up.

On the mound it was Brandon Woodruff’s time to shine. He pitched around a baserunner and breezed through the first two innings. An unearned run crossed the plate on a sac fly in the third aided by an error on a grounder to third baseman Nick Noonan. The inning could’ve been worse had it not been for Brett Phillips tremendous throw to third base which nabbed the runner and turned a sac fly into an inning-ending double play. Woodruff had a perfect fourth and again worked around lone runners in the fifth and sixth. He struck out the only man he faced in the seventh to complete his outing.

The offense returned to form in support of the righty and powered up with a five-run fourth. Yadiel Rivera crushed a one-out solo shot to left center to get the scoring going and Garrett Cooper broke the game wide open with a bases-clearing double upping the lead to 7-1. Phillips drove home CoopaLoop with a single before the inning came to a close. Staumont lasted just 3 1/3 innings and was charged with 7 runs on 7 hits, he walked three and struck out five.

Ramon Torres greeted Wei-Chung Wang with a solo homer in the southpaws first outing for the other Omaha run. The Sox scoring wrapped up with three hits and three runs in the eighth. Kyle Wren, Sogard, and Ryan Cordell connected for hits, the latter of which notched another run. Cooper reached on an error and was awarded an RBI and Phillips picked up he second ribby of the day on a fielder’s choice.

All told the offense rolled with 11 runs on 12 hits, bringing their season tallies to 21 runs on 34 hits through three games…Not too shabby…

For the second straight game, all nine in the Sky Sox lineup reached base safely. There were five multi-hit games and six of the nine reached safely more than once.

Garrett Cooper went 2-for-4 with two doubles and four RBI. It marks the second time in his career that he’s picked up 4 RBI, and both have been with the Sox (8/18/16 vs. El Paso). He had a concentrated effort to go the other way as he had three hard hit balls wo right and right-center in the game, two of which resulted in doubles and made Coach Al LeBeouf extremely happy.

Eric Sogard used #NerdPower to crush the solo homer in the first inning, chopping down on a 94 MPH pitch and blasting it to RF. It marked his first home run since September 23, 2015 when he was with the Athletics and took former Sky Sox reliever Sam Freeman, then of the Rangers, deep for a solo homer. It was his 36th minor-league homer to go along with his eight in the bigs. He picked up a single in the 8th and scored three runs.

Yadiel Rivera is a new man! His glove and arm are big-league ready, not one person doubts that, it’s the bat that everyone is waiting on to come around with Rivera and through the first three games it’s been doing just that. Rivera added another two hits to his resume, a solo homer and RBI single, and is now batting 6-for-12 on the year. His solo blast was the 36th of his minor league career and fourth with the Sky Sox. He has yet to leave the yard in 42 big-league games.

Ryan Cordell added a single and a double, walked, drove in a run and scored one too.

Brett Phillips went 1-for-5 with two RBI and more impressively added two more outfield assists to his season total, which is up to 3. His cannon arm will play anywhere and the one-hop throw he made from right-center to 3B yesterday was a sight to behold. He had nine outfield assists with Biloxi a season ago and now has 40 in his minor-league career.

Ivan De Jesus walked and scored a run, Nick Noonan went 1-for-4 with a run scored, and Adam Weisenburger drew two walks and crossed the plate once as well.

Brandon Woodruff was as advertised. He threw strikes, he threw hard, and he controlled his tempo and pace like a veteran. It all added up to 6 1/3 strong, efficient innings, in which he allowed an unearned run on five hits, he didn’t walk anyone and struck out four. He did it on 77 pitches, 57 of which were strikes. He spun a beauty and did NOT want to come out of the game in the seventh, but as Rick Sweet usually does, he won that debate and…

Damien Magnifico took over and worked the final two outs of the frame in scoreless fashion, walking one.

Wei-Chung Wang gave up the solo shot to Torres in his 2017 debut, but nothing else in his one inning.

Tim Dillard entered play for the first time in 2017 and looked sharp striking out one and allowing one hit to Peter O’Brien who was quickly erased attempting to stretch the single to a double on another hose by Phillips.

Garrett Cooper’s three-run double was the blow that took the game out of hand in favor of Colorado Springs, but since we love visuals, we’ll throw in Yadi’s homer in the fourth as a bonus.

Brett Phillips is a character – Dan Karcher learned that first hand before the game with his daily interview for Sky Sox Warmup – Enjoy!

Colorado Springs has never started a season 4-0 in its 30-year history, but can change that with another strong performance today against the Storm Chasers. The only other instances 3-0 has occurred was to begin the 2004 season (three wins at Nashville) and the 2009 season (three wins vs. Las Vegas at home). All part of what makes the game so great. The Sox 2016 Pitcher of the Year Hiram Burgos will look to pick up where he left off a season ago this afternoon against righty Luke Farrell and the Chasers.

Hiram Burgos is a workhorse, a strike thrower, a curveball snapper, and a veteran that any team would love to have on its roster. The righty enters his 9th season in professional baseball, all of which have been in the Milwaukee system. Last season he notched 10 wins, which marked the first time a Sky Sox pitcher got to double digit wins since Alan Johnson won 10 in 2010. He was also proficient at picking runners off of first base, nabbing 13…13! pickoffs in his 27 appearances. He was selected by the Brewers in the 6th round of the 2009 draft out of Bethune-Cookman University and has made 158 minor-league appearances to the tune of a 47-47 record with a 3.83 ERA and 6 MLB starts in which he has gone 1-2 with a 6.44 ERA. He has not pitched in the big leagues since 2013.