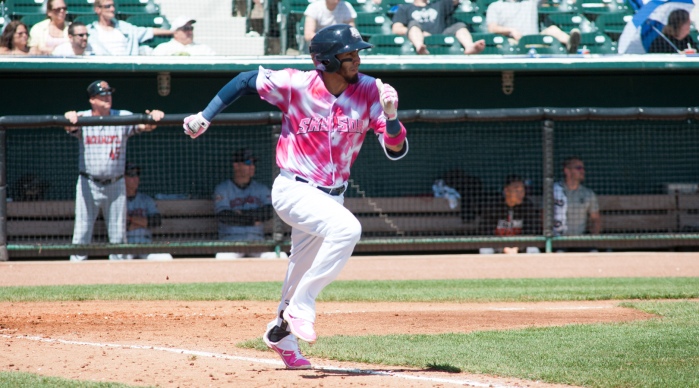 Gabriel Noriega tallied two hits and an RBI in the 4-2 loss to Sacramento on Mother’s Day Sunday. (Paat Kelly)

The Sox had a chance to split the series and finish the homestand 6-2, but the River Cats thwarted that idea with a 4-2 win Mother’s Day afternoon at Security Service Field. The Sky Sox jumped out to another early lead and held two leads in the game, only to have Sacramento tie the game on two occasion and take the lead for good with a two run eighth.

The starters for both teams did not factor into the decision, but both pitched well. Josh Hader went five innings and allowed a run on five hits while walking two and striking out four. The ‘Cats Michael Roth earned a quality start and gave up a pair on six hits, striking out four in six innings.

The Sox made a season high FOUR ERRORS in the loss. That’s right, four big ones. It’s honestly a surprise the game was that close.

The Sky Sox got a taste of their own medicine in this series and notched just 11 runs on 19 hits in the three losses and were outscored 33-15 during the four-game stretch.

Nate Orf collected the other multi-hit affair for Colorado Springs. He went 2-for-3 with an RBI and a run scored.

Ivan De Jesus and Ryan Cordell each went 1-for-4 at the plate.

Josh Hader turned in another solid performance and went five innings allowing one run on five hits, walking a pair and striking out four. He threw 84 pitches, 52 of which went for strikes. The run did come on a solo homer, the ninth he’s given up this season. The nine bombs mark the second-highest mark in the lefty’s career behind the 11 allowed in 2014.

Stephen Kohlscheen was solid across two innings as he gave up an unearned run on two hits and struck out one.

Tristan Archer was roughed up for two runs, one earned, on three hits in the eighth.

The play of the game was either Hwang’s solo homer or Blanks’ go-ahead two run double, BUT the video we have is of Austin Slater crushing a first inning double…Man did he have a series…

The eight-game, nine-day homestand has ended and the Sox have hit the road for an eight gamer, four with El Paso and four with Albuquerque, in fact 17 of the next 21 games are away from Security Service Field.

TRANSACTIONS: The Colorado Springs Sky Sox and the Milwaukee Brewers have announced that LHP Brent Suter has been recalled from Colorado Springs to Milwaukee and INF Garrett Cooper has been placed on the disabled list retroactive to May 14. In a pair of corresponding moves, LHP Andrew Barbosa  has been reinstated from the disabled list and C Rene Garcia has been transferred to the Sky Sox roster from extended spring training . Roster at 25.

Sky Sox Starter: Hiram Burgos finally gets a night game to start in after his last two have come in morning affairs. The righty is coming off a win over Fresno in the series finale. He allowed two unearned runs in five innings. His other win came against Iowa on April 28, a game that saw him throw five-scoreless innings. The righty is a well rounded veteran pitcher that throws strikes, has a very good curve ball and any team would be so lucky to have him on the roster. He has faced the Pups once in his career and earned the win with five scoreless innings, walking two and striking out one at Southwest University Park on August 25, 2015 . He is 1-1 with a 4.50 ERA in two road starts allowing 6 runs (5 earned) on 10 hits in 10 innings.

He is in 9th season in professional baseball, all of which have been in the Milwaukee system. Last season he notched 10 wins, which marked the first time a Sky Sox pitcher got to double digit wins since Alan Johnson won 10 in 2010. He was also proficient at picking runners off of first base, nabbing 13…13! pickoffs in his 27 appearances. He was selected by the Brewers in the 6th round of the 2009 draft out of Bethune-Cookman University and has made 164 minor-league appearances to the tune of a 49-49 record with a 3.82 ERA and 6 MLB starts in which he has gone 1-2 with a 6.44 ERA. He has not pitched in the big leagues since 2013.

Burgos worked five innings and gave up a pair of unearned runs on six hits to the Grizzlies. He walked three and struck out three on 90 pitches, 61 of which went for strikes. He improved to 2-2 with the win.

Chihuahuas Starting Arm: Right-hander Walker Lockett is slated to get the start tonight for El Paso. He enters 3-1 with a 5.50 ERA, allowing 27 runs on 47 hits in 37 2/3 innings. He’s given up seven homers, hit two batters, walked eight and fanned 25; opponents are hitting .294 against the 23-year old. Three of his seven starts have come at home and he is 2-0 with a 2.50 ERA in those contests. The Jacksonville, Florida native has never faced the Sky Sox in his 10 Triple-A starts.

Lockett was selected by the Padres in the fourth round of the 2012 draft out of Providence School of Jacksonville. He has progressed every year since 2015, after a slow, injury-riddled start to his career, and is coming off a season in which he made starts at four levels and accrued a 10-9 record with a 2.96 ERA. In total he is 17-17 with a 3.99 ERA in five-plus professional season.

Last Time Out – May 9 – No decision at Nashville

Lockett pitched into the sixth inning, but did not factor into the decision during the Pups 8-6 win over the Sounds in Music City. The righty finished after 5 2/3 innings and gave up four runs on eight hits, two of which left the yard, he did not walk a batter, hit one and struck out seven on 99 pitches, 70 of which were in the zone.

Dan Karcher (@SkySoxKarch) continues his 28th season behind the mic for Sky Sox games, he will have the call of today’s game from Southwest University Park at 6:35 p.m. I will get Sky Sox Warmup fired up at 6:00 p.m. MDT on XTRA Sports 1300.