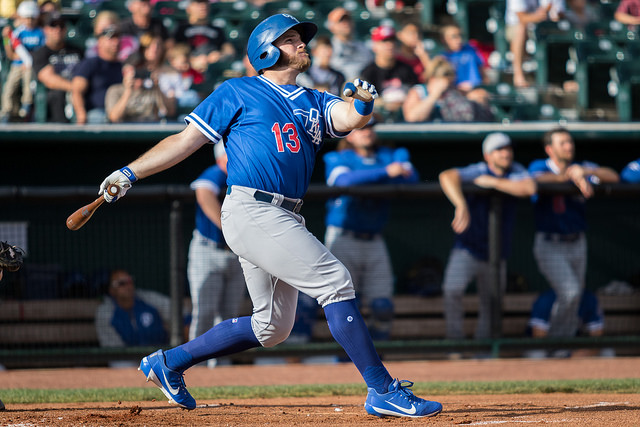 Max Muncy hit two of the four homers hit by the Dodgers in the 11-2 opener Saturday night at Security Service Field. (Bobby Stevens/MiLB)

On Star Wars night it was the dark side that came out the victors in the 11-2 ballgame. Yes, that’s right the Oklahoma City Dodgers pulled out the nine-run win over the Sky Sox in the first game of the four-game series at Security Service Field.

Forrest Snow climbed the hill in an all-too familiar spot start situation and was tagged for two runs in the first inning on a Max Muncy big fly that came on a 3-1 pitch with two down. Another two runs scored on an Alex Verdugo double in the second and runs five and six crossed the plate in the third on another Muncy blast and a Charlie Culberson single. 6-0 heading to the bottom of the third. On an interesting note, Snow went the first seven outs of the game and picked them all up via strikeouts, but gave up the six runs on six hits in the process. Baseball is a funny, funny game.

The Sox jumped on the board with a two-run third, but that would be all the scoring that took place. Ryan Cordell picked up a triple to right that scored Nate Orf and Brett Phillips followed with a gift double that scored Cordell from third and trimmed the deficit to 6-2.

A run in the fourth and fifth innings for the Dodgers increased their lead to 8-2 and the scoring was capped off on a three-run blast to center off the bat of Kyle Farmer in the eighth to make it the final score of 11-2.

The Sox used five pitchers, Snow, Andy Oliver, Tristan Archer, Stephen Kohlscheen, and Tim Dillard in the nine innings and combined they struck out a season-high 15 batters. Not enough to drown out the tough loss, but an interesting number no less.

The Sox scored two runs on seven hits in the opener of the series and had one multi-hit game in the process.

Kirk Nieuwenhuis continues to hit and turned in a 3-for-3 day at the dish with three singles. He was on base all four times thanks to a walk.

Ryan Cordell had an RBI triple, one of three extra-base hits for the Sox.

Brett Phillips went 1-for-4 with a double and RBI.

Nick Noonan, yes that Nick Noonan who started the season with the Sox then was traded to Miami and traded back to Milwaukee yesterday, had a double in his return.

The Sox used five pitchers and fanned a season-high 15 batters in the loss.

Forrest Snow took the loss as the starter and allowed six runs on six hits in two and one-third innings. He walked one and fanned seven while allowing two homers on 66 pitches, 40 of which went for strikes.

Andy Oliver was the first out of the bullpen and recorded eight outs, but gave up a pair of runs (one earned) on five hits, he walked one and struck out two.

Tristan Archer was the best pitcher of the night for the Sox as he went two perfect innings, striking out a pair.

Stephen Kohlscheen gave up the three-run blast to Kyle Farmer in his one inning of work.

For the Sky Sox the play of the game would have to be Ryan Cordell’s RBI triple in the third…but there’s no visual evidence of that and to keep this blog stimulating, here’s Max Muncy’s second homer.

Time to get ready for this afternoon’s game, so let’s get to the preview.

Sky Sox Starter: Right-hander Michael Blazek readies for his eighth start of the season, his seventh in a row, and fourth appearance against the Dodgers. The Las Vegas native has an 0-1 record and 3.43 ERA through his first 17 appearances of the season. He has given up 16 runs on 39 hits, walked 24 and fanned 40. Opponents are hitting .245 against the righty. He has been very good in the starting role going 0-1 with a 3.13 ERA. At home he has made just six appearances and holds an 0-1 record and a 6.75 ERA allowing 9 runs in 12 innings.

Blazek went five innings and kept the Redbirds down to two runs on five hits, he walked three and struck out three on 99 pitches, 53 for strikes.

Dodgers Starting Arm: Right-hander Trevor Oaks has been very good for the Dodgers this season. The 24-year old is 3-1 with a 3.84 ERA through the first 12 appearances (11 starts) of his season, one of which came against the Sox. He has given up 29 runs on 70 hits in 65 2/3 innings; he’s given up four homers walked 13 and fanned 59. Oaks limited opponents to a .283 batting average against. Oaks has a ground out to air out ratio of 1.45 this season and 2.16 for his career.

Oaks pitched across three levels last year and went a combined 14-3 with a 2.74 ERA in the 24 starts with Rancho Cucamonga (4), Tulsa (10), and OKC (10). He faced the Sox on one occasion last year and lasted two thirds of an inning and left with a trainer.  The 24 year old was selected by the Dodgers in the 7th round of the 2014 draft out of California Baptist. In the first three years of his career he is 30-11 with a 3.24 ERA in 73 minor league games, 59 of which have been starts.

Oaks earned the win with seven strong innings against the Chasers. He gave up two runs on seven hits, two solo bombs, didn’t walk a batter and struck out 7 on 92 pitches, 64 strikes.

Dan Karcher (@SkySoxKarch) continues his 28th season behind the mic for Sky Sox games, he and I will have the call of tonight’s game from Security Service Field beginning at 1:30 p.m. Sky Sox Warmup fires up at 1:00 p.m. MDT on XTRA Sports 1300.