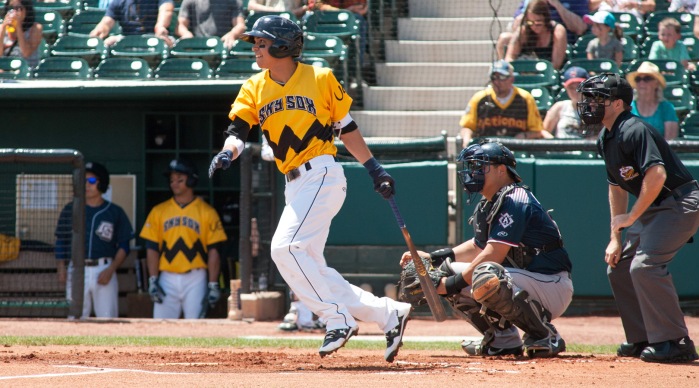 Mauricio Dubon went 3-for-5 in the 7-6 loss to the Reno Aces yesterday at Security Service Field. (Paat Kelly)

The offensive battle continues Sunday with 13 more runs and 24 hits combined between the Sky Sox and Aces in Sunday’s matinee, with the visitors finishing on top 7-6. The Loss marks the second in a row for the Sox and puts the Aces in a position to win the series with the finale looming tonight at Security Service Field.

Both pitchers, Bubba Derby of the Sox and Jake Buchanan of the Aces, turned in three scoreless innings to start…Then came the fourth, where nine of the 13 runs came around to score. The top half saw the Aces get their first baserunner on a leadoff single by Ildemaro Vargas. Jack Reinheimer followed with a single and Zach Borenstein walked to fill the bases with nobody out. Socrates Brito was next and deposited a three-run double down the right-field line, boom, 3-0 bad guys. Willians Astudillo picked up a two-out RBI single to cap off the inning and things were looking good for Reno.

Colorado Springs, being the resilient bunch they are, bounced back and took the lead with a five-run bottom half of the fourth. Ivan De Jesus singled, extending his on-base streak to 40 games, Nate Orf doubled him to third and Chris Colabello walked to fill ’em up for Tyler Heineman. The scorching hot catcher floated a single into left center and plated two runs. Nick Noonan singled to re-load the bases and with one out Kyle Wren picked up a two-run double to tie the game. Mauricio Dubon’s single put the Sox up 5-4 before the inning came to a close.

The score remained in the Sox favor until the sixth when Reno pulled even on Rudy Flores’ RBI single. They would take the lead on a MAMMOTH solo shot off the bat of Zach Borenstein in the eighth and pad the lead on Astudillo’s solo homer in the ninth. The Sox made some racket against Jimmie Sherfy in the bottom on the ninth and scored a run, but couldn’t tie the game or take the lead.

Sky Sox Starter: Brandon Woodruff readies for his 15th start 2017, 14th with the Sky Sox and eighth inside walls of Security Service Field when he climbs the hill tonight against the Reno Aces. This will be a different experience for Woodruff because he is on an MLB rehab assignment. He is 6-4 with a 4.30 ERA overall in his first 13 starts with the Sky Sox. He’s 4-2 at home allowing 22 runs (19 earned) in 35.1 innings. He lost his last home start against the Baby Cakes on May 23. He was called up to the big leagues for a doubleheader, but was injured prior to his debut and is on the mend, trying to get back to the bigs. He went two innings for the AZL Brewers on the 15th and allowed a run on two hits and a walk. In his second rehab start he gave up three earned on three hits in three and two-third innings against the Storm Chasers. In total the righty has allowed 37 runs (33 earned) on 65 hits; he has walked 21, struck out 64, hit four batters and given up eight homers. Woodruff has held opponents to a .248 batting average against and has a 1.36 ground out to air out ratio.

The righty had a tremendous 2016 season in which he combined to go 14-9 with a 2.68 ERA in 28 starts between High-A Brevard County and Double-A Biloxi. He allowed 51 runs (47 earned) on 121 hits in 158 innings. He walked 40 and struck out a Minor League best 173 opposing hitters. Drafted by the Brewers in the 11th round of the 2014 draft out of Mississippi State, Woodruff has compiled a career record of 25-22 with a 3.26 ERA in 76 outings, 68 starts. He is rated as the 7th best prospect and the labeled as the pitcher with the best fastball in the Brewers organization.

Woodruff climbed the hill at Werner Park and recorded the first 11 outs before being lifted. He threw 54 pitches (37 for strikes) and allowed three runs on three hits, including a homer, walked one and fanned three.

Aces Starting Arm: Fellow righty Matt Koch (pronounced Cook) is slated to get the start for the Aces in the series finale tonight along the Front Range. He will be making just his fifth start of the season with the Aces and seventh overall due to an extended stay on the disabled list early in the season. With Reno he is 1-1 with an 8.47 ERA allowing 16 runs on 20 hits in 17 innings. He’s allowed five homers, hit two batters, walked seven and fanned nine. Opponents are hitting .290 against the Cherokee, Iowa native. He has yet to face the Sky Sox in his career.

Koch was originally drafted by the Mets in the third round of the 2012 draft out of the University of Louisville. He pitched in the Mets system for three-plus seasons until he was shipped to the D-backs in the trade that sent Addison Reed to New York, back in August 2015. He made his MLB debut last season and went 1-1 with a 2.00 ERA in seven big-league games. In 116 MiLB games he is 29-25 with a 4.38 ERA.

Koch went the first five innings and allowed four runs on five hits. The righty gave up a homer, walked four and fanned five on 98 pitches, 59 of which went for strikes.

Dan Karcher (@SkySoxKarch) continues his 28th season behind the mic for Sky Sox games, he and I will have the call of tonight’s game from Security Service Field beginning at 6:40 p.m. Sky Sox Warmup gets fired up at 6:00 p.m. MDT on XTRA Sports 1300.