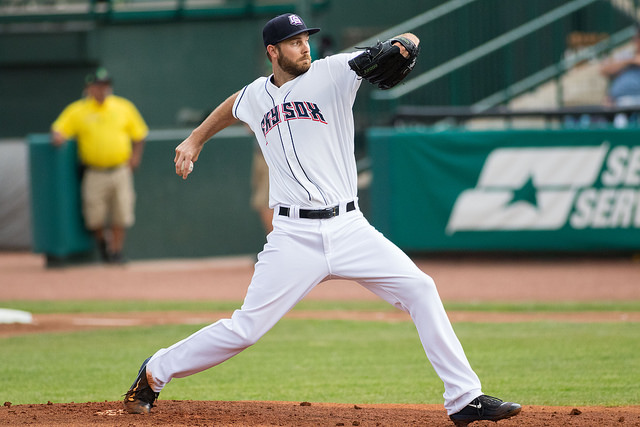 Taylor Jungmann silenced the Rainiers over the first five innings and locked down the win with six strong, one-hit frames. (Bobby Stevens/MiLB)

Taylor Jungmann had a rough start his last trip to the hill in the homestand opener against the Aces, but boy did he turn things around and spark the Sky Sox 12-4, rain-shortened, win Wednesday at Security Service Field. The Sox won their second straight and third of the homestand despite Mother Nature impeding the end of the game as it ended in the bottom of the eighth inning.

Jungmann began the game by retiring the side in order in the first. Then, he did the same in the second. Again in the third. In the fourth it was 1-2-3, too. The fifth saw the righty reign in the Rainiers with a perfect top of the inning. Fifteen up, fifteen down. Not too shabby of a start to the game!

The offense picked up some runs for its starter in the first two innings and took a 4-0 lead, allowing him to settle in that much more. Kyle Wren walked against Chase De Jong to open the bottom of the first and scored three batters later on a throwing error by the shortstop Taylor Motter. The second inning saw four two-out runs plated by the home team on three hits, all singles. Wren drove in Kirk Nieuwehhuis with a knock, Yadiel Rivera scored on Mauricio Dubon’s single and Wren made it 4-zip scampering in on a wild pitch.

Five more runs on six more hits cames around to score in the fifth inning, upping the Sox’s advantage to 9-0. RBI singles by Tyler Heineman and Nieuwenhuis made it 6-0, while Yadiel Rivera’s RBI double and Wren’s two-run two bagger made it 9-0 home team.

Jungmann carried his perfecto into the sixth and retired the first man he faced on a fly ball to left, but walked Danny Muno on four pitches to end his bid at perfection. Another walk ensued, before the no-hitter and shutout came to a close on Leonys Martin’s two-run triple. The Sox starter did bounce back to get two groundouts to end the inning and polished off six frames.

Another two-out rally was fueled for the Sox in the seventh when Rivera picked up a single, his fourth hit of the game, Wren walked, and Dubon brought them both in with a big fly to right-center, 12-2 Sox.

Tacoma notched another two runs against Matt Ramsey in the top of the eighth to make it a 12-4 game. Then the rains came, delayed the game 30-minutes before it was banged for good.

The home team notched another 12 runs on 15 hits, upping their totals in the series to 25 runs on 29 hits in two games. Four in the lineup had multi-hit games and two Sox had perfect days at the plate.

Kyle Wren went 3-for-3 with three RBI and three runs scored. He waled twice and was on base FIVE times! Have a day, leadoff man!

Yadiel Rivera had the other perfect day at the dish and went 4-for-4 with an RBI and three runs scored.

Mauricio Dubon drove in the most runs with a 2-for-5 day, one hit was a three-run homer, the other an RBI bunt single.

Kirk Nieuwenhuis went 2-for-3 with two singles, an RBI, two runs scored and a walk.

Keon Broxton reached base twice with a double and a walk.

Ivan De Jesus had a hit and extended his on-base streak to 42 games, he also scored a run.

Nick Noonan went 1-for-4 with a walk and scored a run.

Tyler Heineman had a hit, plated a run, and scored one in four trips to the plate.

Taylor Jungmann improved to 6-1 with six STRONG innings. He allowed two runs on a hit and three walks while fanning seven on 94 pitches, 56 went for strikes.

Tyler Webb worked a scoreless seventh allowing a hit and striking out two.

Matt Ramsey came on for two-thirds and allowed two runs on two hits, a walk and struck out one.

David Goforth finished the eighth allowing two hits and picked up a K.

The Sox had so many candidates for play of the game, from Jungmann’s outing to the 12 runs on 15 hits…We’ll go with Mauricio Dubon’s three-run blast in the seventh since there is video!

Sky Sox Starter: Tim Dillard has been activated from the disabled list and will make the spot start tonight. The right-hander is 2-2 with a 5.69 ERA in 27 games, one start. He’s allowed 36 runs (31 earned) on 55 hits, three homers, hit 10 batters, walked 21 and struck out 38 in 49 innings. Opponents are hitting .291 against the Social Media Maven.

Dillard recorded two outs and allowed a run on a solo shot in his last outing.

Rainiers Starting Arm: Christian Bergman will be called upon for the third game of this four game series against the Sky Sox. He enters with an 8-1 record and a 3.34 ERA in 11 PCL starts and has gone 4-4 with a 5.44 ERA in nine games, eight starts with the Mariners. In 64 2/3 PCL innings, the former Sky Sox has limited the opponents to 24 runs on 63 hits, yielded three homers, walked 13 and fanned 49. Opponents are hitting .252 against him. He picked for the Sky Sox for 15 starts in 2014 to the tune of a 5-5 record and 4.19 ERA. During that season he went -0 with a 3.63 ERA here at Security Service Field.

Bergman went seven innings and held the RiverCats to a run on five hits, didn’t walk a batter and fanned four on 100 pitches, 69 of which went for strikes.

Dan Karcher (@SkySoxKarch) continues his 28th season behind the mic for Sky Sox games, he and I will have the call of tonight’s game from Security Service Field beginning at 6:40 p.m. Sky Sox Warmup gets fired up at 6:00 p.m. MDT on XTRA Sports 1300.