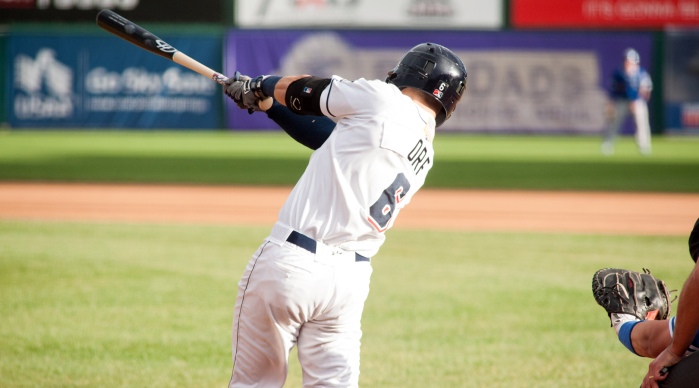 Nate Orf collected the seventh cycle in franchise history and  went 4-for-5 with two RBI and three runs scored in the Sky Sox 11-1 win over Oklahoma City. (Paat Kelly)

The biggest series of the season started with a bang. Well, a lot of bangs. The Sky Sox outslugged the Dodgers 16-5 and scored 10 more runs than them, winning 11-1 on Saturday night at Security Service Field. The magic number shrinks to 9 with the win and the divisional lead climbs to eight for Colorado Springs. Not a bad way to fire things up along the front range.

Believe it or not, the Dodgers held a 1-0 lead three batters into the game. But that would vanish awfully quickly and the Sox never looked back. Henry Ramos doubled to the wall in center, moved to third and scored on two separate groundouts. The Sox used one of five long balls to take the lead two batters into the bottom of the first. Nate Orf did the honors and launched an Eddie Gamboa knuckler over the wall in left, 2-1 Sox.

Brett Phillips made it 3-1 with a solo shot in the third and a six-run fifth upped the home team’s lead to 9-1. Nate Orf doubled, Ivan De Jesus singled and Chris Colabello tallied another single to plate a run and gave way to Phillips. The Sox center fielder hit a rocket over the wall in right for a three-run blast, his second dinger of the game and pushed the lead to 7-1. Tyler Heineman backed it up with a solo shot to right and Gamboa’s night was over at 8-1. Jeremy Bleich gave up a run on three singles and a sac bunt before the inning ended at 9-1.

The Sox would add another run on a Chris Colabello homer in the sixth and a sac fly in the seventh to cap off the scoring. Nate Orf hit a ball down the line in left that rolled around the corner and he ended up at third. It was originally scored a double and E7, but changed to a triple after the game, and rightfully so.

The offense was only half the story! The other half was Bubba Derby on the mound. The right-hander limited the Dodgers to a run on four hits over a season-high seven innings. He was just outstanding and wrapped up his night by fanning the final man he faced. Awesome stuff.

Quick Hits…The cycle by Orf marks the seventh cycle in franchise history and the first since Dexter Fowler did it in 2010…Orf went 4-for-5 with two RBI and three runs, he’s up to .308…Brett Phillips went 3-for-5 with two homers and four RBI…Kyle Wren, Tyler Heineman, Chris Colabello, and Yadiel Rivera each had two hits…Derby’s seven innings marked the third time he’s gone at least seven in his career, the other two happened in 2016…While with Brevard County last season he went 8 innings (7/11) and 7 2/3 innings (8/10)…The win marks the 10th in 13 games for the Sox against the Dodgers…

Sky Sox Starter:Right-hander Junior Guerra will be called upon to start the second game of the pivotal four-game series against the Dodgers this afternoon at Security Service Field.  It will be his fifth start with the Sox this season as on May 20 he fulfilled a rehab assignment with the team against Albuquerque and has subsequently made threestarts since joining the roster on July 30. He made the Opening Day start for the Brewers in 2017 and is 1-4 with a 4.96 ERA in 13 starts with the Crew, but is down in Triple-A searching for lost velocity and command.  He enters 1-2 with a 3.15 ERA in four starts with the Sky Sox and had given up a run on five hits in one home start.

Guerra went the first four and allowed two runs on four hits, walked one and struck out three on 48 pitches, 33 went for strikes in the losing decision.

Dodgers Starting Arm: Righty Wilmer Font is slated to make the 23rd start of his season this afternoon, and fourth against the Sky Sox. He’s compiled a 9-7 record with a league-best 3.30 ERA through his first 22. He’s allowed 47 runs (46 earned) on 103 hits across 125 1/3 innings, with 32 walks and a PCL-high 168 strikeouts. Opponents have tagged him for 11 homers, but are hitting .217 against him. He faced the Sky Sox on May 3rd and June 2nd but did not factor into either decision, allowing three runs on six hits, he walked two and struck out 19. Lewis Brinson took him deep with a leadoff homer and Andrew Susac hit a two-run bomb. He came to the Springs on June 19 and was dealt the loss, giving up five runs on three hits and SIX walks in four innings. He was named PCL pitcher of the week on May 21. He’s 3-1 with a 3.11 ERA in seven road starts. Font has lost his last two starts and is 3-4 with a 4.02 ERA in 12 road starts this season.

Font was the tough-luck loser in his last start after he went the first six innings and allowed a run on four hits, walked one and struck out eight. He fired off 104 pitches, 70 of which went for strikes in the Dodgers 1-0 loss.

Dan Karcher (@SkySoxKarch) continues his 28th season behind the mic for Sky Sox games, he and I will have the call of today’s game from Security Service Field at 1:30 p.m. Sky Sox Warmup will get fired up at 1:00 p.m. MDT on XTRA Sports 1300.