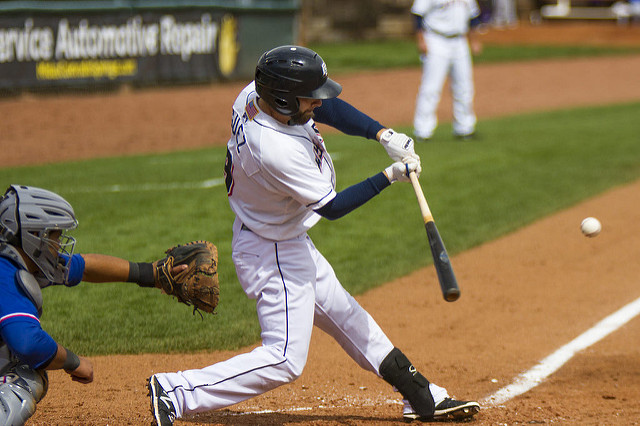 Ben Guez had a big night with a double, homer, and three RBI, but the Sox fell just short 9-8 to the Sounds Thursday night. (Photo: Bobby Stevens/MiLB.com)

Thursday was a picture-perfect day for baseball in the Springs and the Sox were set to host the second night game of the season, the first since the home opener last Friday. The two teams were able to hit on the field prior to the game and that may have been the key to the offense opening up as the two teams combined for 17 runs on 26 hits in Nashville’s 9-8 win over the Sox.

Hitters 5-9 had monster nights for the Sox, each recording a multiple-hit game and combining to go 12-for-24 (.500) with three doubles, a homer, and 8 RBI. On the flipside, the top four in the order went 2-for-18 with a run scored.

Manny Pina led the Sox’s charge with three hits and three RBI from the No. 9 spot in the order.

Hernan Perez tallied three hits as well. He also scored two of the 8 runs and plated an RBI of his own driving his team-high total to 8 alongside Orlando Arcia.

Ben Guez made his second start of the season and brought the Sox to within two in the 6th with a two-run homer, the first of his season and 84th career blast. He then cut the deficit to one with an RBI double in the 9th.

Michael Reed went 0-for-4, but continued his on-base streak with a walk in the third inning. His PCL-leading streak is now up to 23 games dating back to 8/27/15.

The Sox picked up 14 hits in the contest, 4 of which were for extra bases (3 doubles and a homer), but went 4-for-17 with runners in scoring position and left 11 men on base. They couldn’t get the big hit in 8th and left the sacks packed and ended the game with the tying run in scoring position.

In seven games against the Sox, the Sounds have plated 39 runs on 62 hits and belted 8 home runs, including 5 in the last two games.

Brent Suter pitched well through the first five innings allowing three runs on five hits, but ran into a buzzsaw in the sixth. He gave up back-to-back doubles to Smolinski and Nunez and walked Max Muncy to end his outing.

Damien Magnifico pitched a 1-2-3 ninth and kept the game within reach for the Sox who fell just short in the home half of the inning. He’s now working on 6 1/3 innings without allowing a run, in which he’s allowed 2 hits and 2 walks.

Play of the Game:

Unfortunately the play of the game didn’t land in favor of the Sox. Andrew Lambo stepped in with the bases loaded against Austin Ross and hit a grand slam over the wall in right-center which broke the tie and gave the Sounds an 8-4 lead in the 6th.

Pregame Interview with Manager Rick Sweet – Round 3 of “Sweet 16”:

Thanks for reading! See you on the radio,