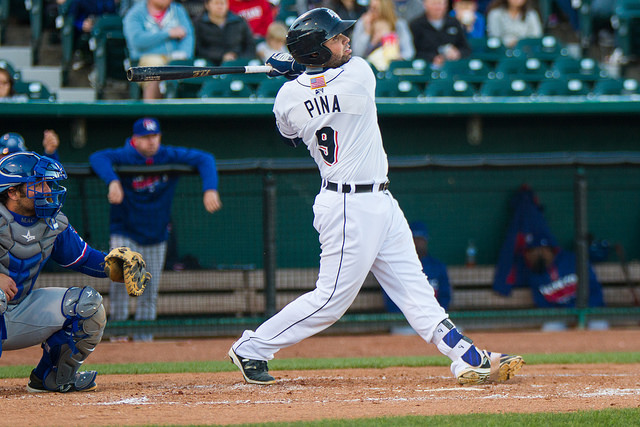 Manny Pina has been the Sky Sox most consistent hitter this season and he added another two hits Monday against the Dodgers. He’s now hitting .370 in 20 games with Colorado Springs. (Bobby Stevens/MiLB.com)

The Sky Sox trailed 3-0 at the stretch, but powered up to the tune of seven runs on five extra-base hits (4 doubles and a home run) and took down the Dodgers 7-3 and gained a split of the four-game series yesterday at Security Service Field. The win closed out the 8-game homestand for Colorado Springs, on which they finished 3-5. Jorge Lopez and Julio Urias pitched for the Sox and Dodgers respectively and both pitched solidly. Lopez worked a season-high five innings and Urias pitched six-strong innings and left in line for the win, before the bullpen collapsed. The four-run margin of victory was the largest for the Sky Sox this season and their first win of 3 or more runs.

The Sky Sox outhit the Dodgers 9-5 and picked up four hits against the 19-year old lefty phenom Julio Urias. The four hits marked the second-most allowed by the lefty this season.

Trailing 3-0 in the bottom of the 7th, the Sky Sox tried to take advantage of a Dodgers’ pitcher not named Julio Urias. Michael Reed began the inning with a walk, then stole second before Josmil Pinto drove him home on a double. After a Jake Elmore walk, Garin Cecchini hit a sac-fly to make it 3-2. Then, the doubles parade began. Broxton, Orf, Middlebrooks all hit RBI two-baggers and Manny Pina delivered a 2-run homer to left, giving the Sky Sox the 7-3 lead.

Keon Broxton went 2-for-3 with a double, RBI, and run scored in the win. His two knocks extended his hitting streak to a season-high 8 games.

Manny Pina collected the other two-hit game for the Sky Sox and went 2-for-4 with a 2-run homer and run scored. Pina’s second home run of the season capped off the Springs’ 7-run 7th inning.

Jorge Lopez faced 8 hitters over the first two innings, which was a stark difference from his previous outings, although the two baserunners did reach on free passes. The righty walked three more in the third which led to a run before he pitched well in the 4th and 5th innings to cap off his season’s best outing. He ended up going 5 frames and allowed the 1 run on 2 hits, 5 walks, and 5 strikeouts. He threw 81 pitches, 45 for strikes.

Tim Dillard came out of the pen first and pitched a scoreless 6th before running into trouble and allowing a pair of runs in the 7th.

Austin Ross swooped in and finished the 7th for Dillard on 5 pitches and thanks to the 7-run 7th for the Sky Sox offense, picked up the win in relief. The victory marked his second of the season.

Damien Magnifico was called upon in a non-save situation and closed the game out with two scoreless innings. He gave up a hit, a walk, and struck out four on 28 pitches in his two innings of work.

I’m going to go ahead and say the entire 7th inning was the play of the game. The Sky Sox needed a win in the ballgame yesterday to gain a split with the Dodgers and they also gained a game on the first-place Omaha Storm Chasers. The five XBHs and 7-runs in the inning were a huge boost for a team that is still trying to string together three wins in a row this season.

Pregame interview with me and Dodgers’ RHP Jeremy Kehrt: