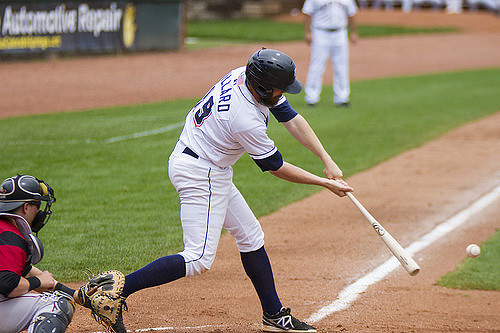 For most relief pitchers, at-bats are few and far between. When they rarely happen, rarely do they provide a moment that can provide the spark that a team needs to begin a winning streak.

So when Colorado Springs Sky Sox relief pitcher Tim Dillard strolled to the plate with two outs and a runner on second in the fifth inning last Wednesday in New Orleans, not much was expected of him, even from his own teammates.

“I knew he had some at-bats in the past, but I’d never actually seen him hit,” said Sky Sox outfielder Eric Young Jr., who was on second when Dillard came to the plate. “I didn’t have too many expectations.”

Dillard himself didn’t set the bar too high.

“My first thought was bunt so I don’t hurt myself,” he said.

But with two outs, a bunt was out of the question, so Dillard’s thoughts turned toward trying to make the most of his appearance at the plate.

After taking a ball down and outside on the first pitch of the at-bat, Dillard knew what was coming on the next one.

“I knew I was getting a fastball right down the middle, it was just a matter of getting to it,” Dillard said. “I really had to shorten my swing to get the bat to the ball.”

Dillard got his bat on the ball, and what happened next shocked everyone.

“When he actually put the swing on it and I saw where the ball was going I thought that ball was gone, it was just a matter if it stayed fair,” Young Jr. said. “I had no expectations.”

“When you have that moment of making good connection on the ball, you know it. I knew right away I hit it well,” Dillard said. “Luckily, it went out.”

When they got back to the dugout, Young Jr. and Dillard were met by their teammates, sort of.

“They were going crazy,” Dillard said of his teammates. “But they were all over (Eric Young Jr.) because they were trying to snub me.”

“Everyone was giving me high fives then they were giving him the silent treatment,” Young Jr. recalled. “Then we all jumped on him.”

The home run gave the Sky Sox a 9-5 lead that they would hold to even up their series in New Orleans.

“I figured it was fitting right there that I hit the double then he hit the home run,” Young Jr. said. “Considering we just did the dubsmash of White Lightning and Black Hammer.”

Eventually, Dillard checked social media and saw many were impressed and surprised with his sudden power burst.

TIM DILLARD JUST HIT A TWO-RUN HOME RUN FOR THE @SKYSOX! This is better than Bartolo for me! Congrats, @DimTillard!

Andy Wilkins and Keon Broxton homered in @skysox win today as did … Tim Dillard. I kid you not.

The win sparked a five game winning streak for the Sky Sox, their longest winning streak since their affiliation with the Milwaukee Brewers began last season.

“I think that’s what our team needed,” Dillard said. “Everyone started feeling better. When you’re feeling good, you’re going to play good. That was probably the spark.”