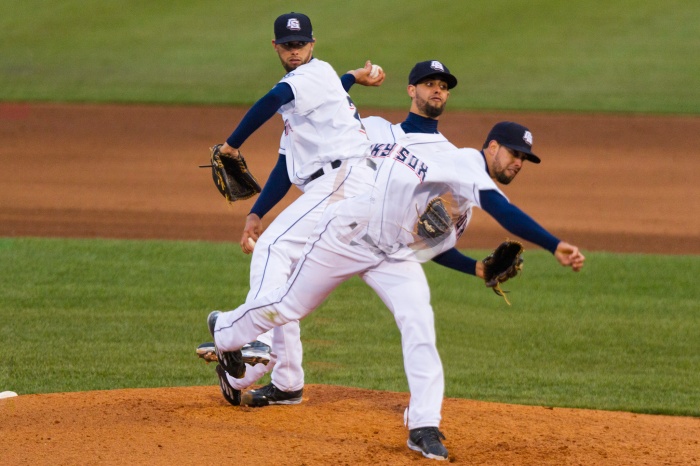 Righty Jorge Lopez is looking looking to turn in his third straight strong performance when he takes the hill against Las Vegas tonight at Security Service Field. Bobby Stevens of MiLB.com put together this photo of Lopez’s motion in the 18-inning affair last Saturday. (Bobby Stevens/MiLB.com)

The Sky Sox fell behind 6-0 before an out was recorded last night, BUT in true 2016 Colorado Springs fashion the team battled back to tie the game before ultimately falling 7-6 at the hands of the Las Vegas 51s. With the loss, the Sky Sox drop to 17-19 and their 5-game winning streak came to an end. Taylor Jungmann fell victim to the 51s hot bats in the first and recorded just one out. Ariel Pena was hung with the loss. Yadiel Rivera led the charge with three hits, including a triple, while Orlando Arcia and Garin Cecchini each had a pair of hits. Andy Wilkins also went deep for the fifth time this season and the fourth time in his last 10 games.

Before we get into tonight’s starting pitchers, the Brewers and Sky Sox announced a few roster moves today:

Many congrats to Keon Broxton who tore it up with the Sky Sox – a well-deserved call up! Can’t wait to keep track of his successes in Milwaukee! He’s getting the start in centerfield tonight at Citi Field as the Brewers visit the Mets.

The Sky Sox and Las Vegas 51s get set for the second game of a four-game series tonight at Security Service Field. The Mets top affiliate in the Pacific Coast League is 22-17 on the season and currently riding a four-game winning streak after their 7-6 win last night. This is the second inter-conference matchup for the Sox after they dismissed the Bees 2-0 on the beginning half of the homestand. The Sox and 51s split a four-game series last year and the all-time series lies 188-169 in favor of the Sky Sox. This will be the only series against Las Vegas in 2016.

Sky Sox Pitcher: RHP Jorge Lopez is ready to take hits eighth turn in the rotation for the Sky Sox tonight at Security Service Field, it will be his sixth start at home. Through his first five home outings the righty is 0-1 with a 5.16 ERA allowing 14 runs (13 earned) on 23 hits, 19 walks, and 17 strikeouts through 22 2/3 innings. On the contrary he is 0-1 with a 9.45 ERA in 6 2/3 innings on the road. Lopez has turned things around in his last two games pitching 11 innings combined allowing 2 runs on 6 hits, 7 walks and 6 strikeouts. It appears that the 23-year old has put getting the strikeout on the back burner and pitching more to contact which has greatly reduced his pitch count and afforded him the opportunity to go deeper into ball games. He has logged 81 and 80 pitches respectively over his last two outings. They righty is in search of his first Triple-A victory after accumulating a 1-1 record in the bigs last season.

Last Time Out: 5/14/16 vs. Salt Lake – Lopez turned in the best performance of his season as he threw six innings of 4-hit ball in Saturday’s game that ended up going 18 innings. He allowed 1 run on the 4 knocks, limited the Bees to 2 walks, and struck out one. He’s lowered his ERA down from 8.84 to 6.14 over the last 11 innings and his batting average against has dipped to .294, down from .358. He looks to turn in his third great outing in a row.

Las Vegas 51s Pitcher: RHP Stolmy Pimentel will get the spot start for the 51s as the original probable, lefty Sean Gilmartin, made the trip to Citi Field to rejoin the Mets. Gilmartin was 4-1 with a 2.48 ERA in six games with the 51s and certainly deserving of the call. Pimentel is a journeyman righty that began his career with the Red Sox, then moved on to the Pirates and Rangers before finding himself with the Mets. In 33 big-league relief appearances with the Pirates and Rangers, Pimentel is 2-2 with a 4.39 ERA. In 184 MiLB games (166 starts) he is 50-56 with a 4.35 ERA. Tonight will mark the ninth appearance (5th start) with the 51s for the 26-year old righty. Over the first eight appearances he is 0-3 with a 9.86 ERA allowing 24 runs (23 earned) on 35 hits, 2 homers, 2 hit batters, 13 walks, and 17 strikeouts in 21 innings. Opponents are hitting .372 against the righty from San Cristobal in the Dominican Republic. This will be Pimentel’s first career appearance against the Sky Sox.

Last Time Out: 5/13/2016 vs. El Paso – Pimentel took the start for the first time in four games his last time out against the Chihuahuas and lasted just 2 1/3 innings. He took the loss and allowed 6 runs on 8 hits, 1 hit batter, 2 walks, and 3 strikeouts. He threw 63 pitches, 34 for strikes. Pimentel has taken the loss in three of his four starts.

Dan Karcher (@SkySoxKarch) continues his 27th season behind the mic for Sky Sox games, he  and I will have the call of the first pitch from Security Service Field at 6:35 p.m. Sky Sox Warmup gets all fired up at 6:00 MDT on XTRA Sports 1300.

The Brewers wrapped up their series with the Cubs with a 5-3 win yesterday afternoon…The Crew took 2-of-3 from the Cubbies and hit the road to open up a weekend series against the New York Mets today at Citi Field…Wily Peralta gets the start against the young lefty Steven Matz…Biloxi lost 7-2 to the Smokies as Tennessee picked up a five-run fifth en route to the win…Brandon Woodruff took the loss in his Biloxi debut…Tyrone Taylor had two hits and Jacob Nottingham picked up his fourth homer of the season…The Manatees had their game with the Marauders suspended in the bottom of the 9th with the score tied 1-1…Johnny Davis went 3-for-4 with the lone Brevard County run and angel Ventura gave up 1 run on 2 hits, 1 walk and 5 strikeouts in his start…Wisconsin fell 7-3 to Burlington and dropped to 19-21 on the season…Trent Clark, David Denson, and Alan Sharkey each tallied multiple-hit games for the T-Rats.