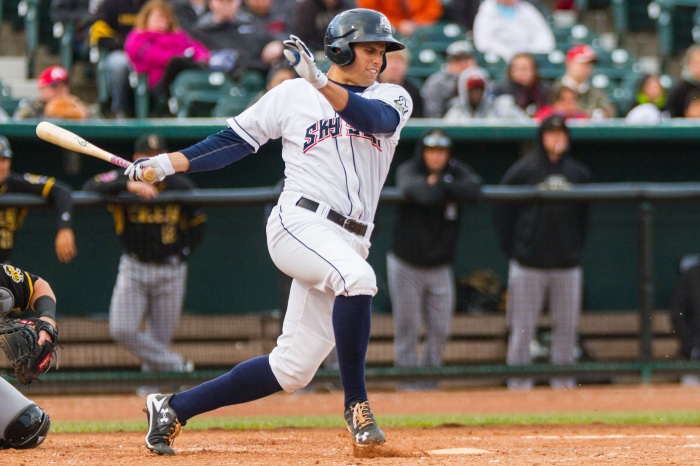 Garin Cecchini was one of three Sky Sox to reach base twice and collected the lone multi-hit game in the series finale against the River Cats last night. Colorado Springs needs an offensive boost as they get set to open up a four-game series against the Fresno Grizzlies tonight. (Bobby Stevens/MiLB.com)

O brother, where art thou offense? Colorado Springs rolled in to Sacramento ready to face the team with the league’s worst record, expecting at least a split, if not better, but escaped town with just one win in the four game series.

The set ended with the Sky Sox on the wrong end of the 6-1 decision as they mustered just the one run on a sac fly in the ninth inning and five hits total. Nate Orf hit the sac fly that plated Andy Wilkins in the final frame of the series and snapped the Sky Sox 19-inning scoreless streak. Yes, they had not scored since their four run eighth inning on Tuesday. Hiram Burgos took the loss and allowed 4 runs (2 earned) on 8 hits and couldn’t make it out of the sixth. Michael Kirkman gave up the other pair, while the “no-hit man” Chris Heston turned in a great outing with six scoreless innings. He walked four and scattered three hits.

The Sky Sox finished the series 1-3 against the River Cats and now head to Fresno where the Grizzlies are coming off a sweep of Oklahoma City. Colorado Springs tallied 9 runs on 12 hits in the lone win of the series, while collecting just 3 runs on 14 hits in the three losses.

Garin Cecchini led the offensive attack for the Sky Sox with a 2-for-3 performance at the plate.

Andy Wilkins was one of three Sky Sox to reach base twice as he went 1-for-3 with a single and a walk. He scored the lone Sky Sox run on the sacrifice fly in the 9th.

Shane Peterson delivered the lone extra-base hit, a pinch-hit double in the ninth which set the table for Wilkins to score the run.

Hiram Burgos delivered four scoreless innings before Grant Green took him deep and opened the scoring with a solo home run in the fifth. Burgos gave up another trio of runs in the sixth, albeit two were unearned, before his outing came to an end after 5 2/3s. Burgos’ final line read 5 2/3 innings, 8 hits, 4 runs, 2 earned runs, 2 walks, and 3 strikeouts. His ERA continues to dip and is now at 4.03.

Michael Kirkman came on in the sixth and ended the scoring with a strikeout of Hak-Ju Lee, but ran into his own trouble in the 7th. The southpaw gave up back-to-back singles to begin the inning and those two came all the way around to score on a sac bunt, Mitch Delfino single and Andrew Susac sac fly. Kirkman went the 1 1/3 innings and allowed 2 runs on 3 hits, and 1 strikeout.

Unfortunately, with the way the last two games have gone, we haven’t had much in the play of the game department, but in the interest of getting some momentum on the side of the Sky Sox our play of the game was Nate Orf’s sacrifice fly in the ninth. The Sky Sox avoided being shutout on back-to-back nights, they picked up a pair of hits in the inning and ended the series with a run. Hopefully some good juju made the trek south with them to Fresno.