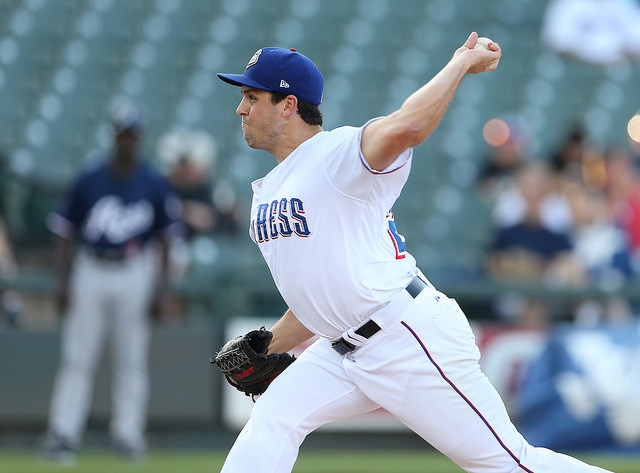 Michael Roth tossed the first complete game shutout of his professional career last night and limited the Sox to just two hits. Josmil Pinto broke up the no-no with a one out triple in the 8th. (Jamie Harms/MiLB.com)

The Sky Sox rode into Round Rock Sunday night with a 4-game winning streak and needed a win over Michael Roth and the Express in order to extend it to a season-high five games. That sounds simple enough, but the lefty had other plans for Colorado Springs. He retired the side in order in the first, again in the second, and got the first two out in the third before walking the number  nine man Eric Young, Jr. on four pitches, giving the Sox their first baserunner. Roth was unfazed and induced a hard line out off the bat of Jake Elmore to end the inning.

Hanser Alberto, Round Rock’s shortstop committed an error to open the fourth, but again the lefty was composed and got a double play and another ground out to end the frame. Brett Nicholas took Wily Peralta deep for a solo shot in the home half of the inning and that would be all the support Roth would need. Long story short, the lefty didn’t allow a hit until Josmil Pinto tripled in the 8th inning. The Sky Sox would not score in the inning and he finished the CG SO, working around a hit in the scoreless ninth. Despite needing just the one run, the Express tacked on three more against Peralta in the fifth and three more against Drew Gagnon in the 8th en route to the 7-0 win.

The Sky Sox picked up two hits in the 7-0 loss, matching the fewest number of hits in a game this season. They also were limited to two hits in the 3-0 loss to New Orleans on June 4. The shutout loss marks the 9th time the Sox have been blanked this season.

Josmil Pinto hit a triple off the top of the left-field wall with one down in the 8th inning for Colorado Springs’ first hit.

Jake Elmore singled with one out in the 9th inning for the Sky Sox second hit.

Wily Peralta took the mound for his third start with the Sky Sox and first away from Security Service Field. He turned in the longest Triple-A outing this season with four-plus on the mound. He could not record an out in the fifth and faced four batters. In total he allowed 4 runs on 5 hits, 2 walks, and 4 strikeouts in four-plus innings. He threw 62 pitches, 36 for strikes.

Sam Freeman faced his former team and spun three scoreless innings against the Express. He allowed two hits, one walks, and struck out four.

Drew Gagnon was roughed up in the 8th to the tune of 3 runs on 3 hits. He didn’t walk or strike anyone out.

Josmil Pinto stepped in with one out, nobody on in the eighth and a whole bunch of pressure on his shoulders as the Sky Sox were trying to avoid getting no-hit. The first two offerings from Roth were taken for balls, the next two for strikes. Pinto lined up the 2-2 pitch and crushed it to deep left field where Kyle Kubitza tracked it and watched it bound off the top of the wall. Pinto hustled out of the box and ended up at third with his second three-bagger of the year.