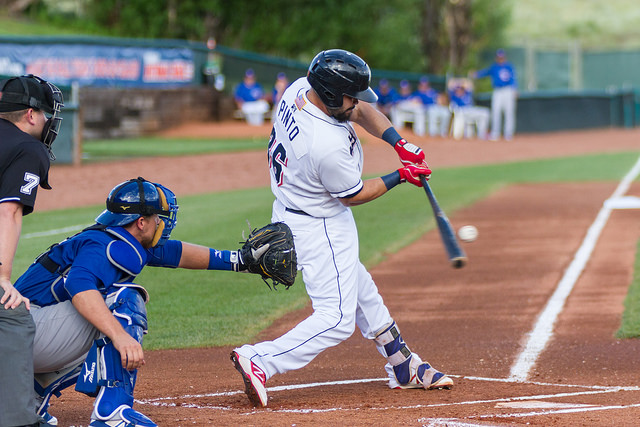 Josmil Pinto cracked a solo home run in the fourth inning of Tuesday’s tilt in Omaha. The Sox have homered in 12 straight games with one homer in each game. (Bobby Stevens/MiLB.com)

What a weird night Tuesday was. The game ended well with Colorado Springs on top 3-1, but getting there was a journey. The wildness started in the first inning when each team picked up a one-out double, but then lined into an inning ending double play with the Sox gong 4-unassisted off the bat of Lewis Brinson and the Chasers lining out 1-4 for the DP off of Jorge Bonifacio’s twig. Hiram Burgos pitched really well for the Sox and returned to form allowing just one run over six innings. The offense picked up a run in the third inning without the benefit of a base hit…and that wouldn’t be the only time they did that in the game. Michael Reed, EY, and Yadiel Rivera all drew walks against Christian Binford to begin the third before Kyle Wren grounded into a double play and put the Sox up 1-0. That would be all they would get in the third, but Josmil Pinto picked them up with a solo homer crushed to left in the fourth, which broke a 1-1 tie. In the fifth Reed reached on a two-base throwing error by Orlando Calixte and scored on a two-base throwing error by the catcher Parker Morin on EY’s sac bunt making it 3-1. Omaha’s run came in the third on a Whit Merrifield RBI double. That would be all of the offensive output for the Sox and Chasers in the third game of the four game series. Burgos picked up his first win in seven starts as Tyler Cravy and Damien Magnifico wrapped it up on the mound with three scoreless.

The Sky Sox scored three runs on six hits, but again used 0 hits in two separate innings to score a run. Crazy. Two Sox reached twice (traditionally) and one had a multi-hit game.

Lewis Brinson turned in a 2-for-4 night and extended his Sky Sox hitting streak to 8 games and upped his overall streak to 11 dating back to his final three games in the Texas League with Frisco.

Josmil Pinto picked up a solo homer and extended the Sox streak to 12-games in a row with ONE homer. No multi-homer games during that stretch, but Pinto now has 8 homers on the season and three in his last four games played.

Nate Orf had a double, Garin Cecchini and EY had singles in the 3-1 win. Michael Reed walked (because of course he did) and scored two runs.

Hiram Burgos had an outing! He went six innings and limited the Chasers to 1 run on 5 hits, 3 walks, and struck out 6. He earned the first win in seven starts and snapped a personal four game losing streak, improving to 6-9. He threw 99 pitches and 54 pumped in for strikes.

Tyler Cravy was outstanding in two innings of work with no runs allowed on 2 hits and 5 (!) strikeouts! He struck out the side in the eight before handing things over to the closer.

Damien Magnifico picked up his 16th save of the year with a scoreless ninth, in which he struck out 2.

Josmil Pinto’s solo home run broke a 1-1 tie and gave the Sox the lead for good in the fourth inning. It marks his third homer in four games played and eighth of the season! He’s heating up at the right time for the Sky Sox!