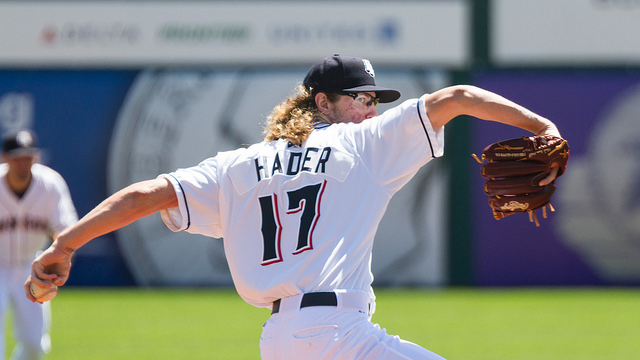 Josh Hader was as advertised Sunday night and struck out 12 batters in six innings against the Express. Colorado Springs won 6-0. (Bobby Stevens/MiLB.com)

Sunday night the Sky Sox steamrolled the Express 6-0 in what was the most dominant pitching performance of the season. Eric Young, Jr. provided some pop with a two-run single and a two run double, and Brandon Macias capped off the scoring with a two-run blast in the sixth. But Sunday was all about Josh Hader and the pitchers. Hader dealt to the tune of six scoreless innings and racked up a career-high 12 strikeouts in the process. Sam Freeman and Ben Rowen followed and combined to strikeout six boosting the game’s total to 18 strikeouts. Think about that…18 of 27 outs (2/3rds!!!!) were by way of the K. That’s insane and in fact is the first time in franchise history the Sky Sox have K’d 18 men in a 9-inning game. It’s the first time 33 strikeouts have been recorded in a two-game span, and the first time in franchise history the Sox have had starting pitchers pick up 11 or more strikeouts in consecutive games. WOW. That’s just incredible. Lost in all of this was Hader picking up his first Triple-A win, congrats to him! And the Sox are back to .500 at 62-62, just awesome.

The Sky Sox picked up six runs on eight hits and had a veteran in Eric Young, Jr. lead the way. Two Sox hitters tallied multi-hit games in the win. This all came in a game that was started by lefty Michael Roth, one of the best in the PCL.

Eric Young, Jr. paced the offense from the number 8 spot in the lineup and wasn’t even supposed to play! He was a late addition to the lineup and turned in a 2-for-4 performance with a two-run single and two-run double which combined put the Sky Sox up 4-0. He now has 30 RBI on the season and collected his first 4 RBI game in the minors since a 5 RBI game in July 2009 with the Sky Sox.

Brandon Macias backed up Young’s 2-run double in the sixth with a two-run homer and capped off the scoring at 6-0. It was his second homer of the season and brought his RBI total to 9 with Colorado Springs.

Kyle Wren picked up a three-hit performance and boosted his average to .350.

Michael Reed was the other Sky Sox with a hit, he also picked up a free pass in the win.

Josh Hader had himself a night. The 22-year old southpaw earned his first Triple-A win with six scoreless innings. He limited the Express to two hits, a walk, and struck out 12, a career high. 12 of his 18 outs were via the K. How about that. He struck out one in the first, three in the second, two in each of the innings 3-through-6…He had struck out 10 on two occasions in his career, but never more than that, until Sunday. He threw 99 pitches and dotted the strike zone with 65 of them. His ERA lowered to 4.79. What a night.

Sam Freeman was first out of the ‘pen and he recorded five outs, and tallied four strikeouts. He didn’t allow a hit and gave up just one base runner when he hit Joey Gallo with a pitch.